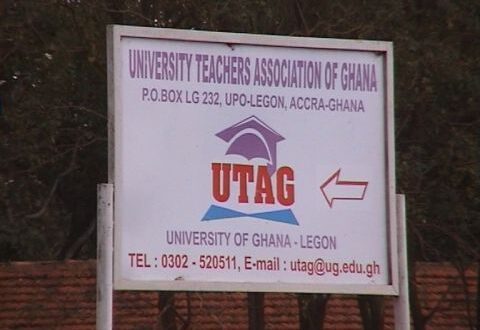 UTAG threatens to strike from August 2 over market premiums

The University Teachers Association of Ghana, UTAG, has threatened to embark on a strike from August 2, 2021, if the government does not restore the conditions of service agreed upon with the government in 2012.

At a press briefing in Accra on Wednesday, July 28, 2021, the National President of UTAG, Professor Charles Marfo, urged the government to meet the union’s demands “for the sake of industrial harmony and not to compound the already jeopardized academic calendar of the public universities.”

It says the current arrangement has reduced its members’ basic premiums to $997.84.

Mr. Marfo expressed hope that the government would meet the demands of UTAG for the sake of preserving the academic calendar.

“Until our demands are considered and met completely, UTAG would have no other option than to embark on industrial action by withdrawing teaching, which includes the conduct of examinations, marking of examination scripts, and other related matters, starting from Monday, 2nd of August 2021 until further notice.”

UTAG’s contentions are among the multiple grievances from a number of unions from universities across the country.

Worker Unions of the C.K Tedem University of Technology and Applied Sciences, and the Simon Diedong Dombo University of Business and Integrated Development Studies have also said they will embark on strike on August 2

Their issues have to do with their migration onto the Controller and Accountant General Department’s payroll system, which they say will result in the loss of basic salaries and allowances.

The Senior Staff Association of Universities of Ghana is also threatening a strike because of stalled negotiations to improve its members’ conditions of service.

The association has even said it plans to petition Parliament on the matter.