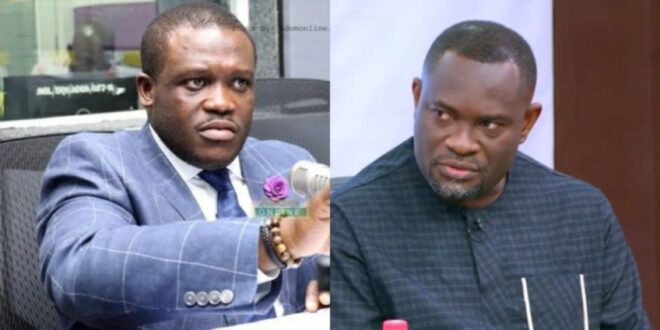 As Ghanaians struggle to come to terms with the controversial Electronic Transfer Levy (E-Levy), many have questioned whether there will ever be a consensus between government and the opposition over its need.

On May 1, the government went ahead with the implementation of the 1.50% tax on electronic transactions, which has been met with a myriad of fierce criticisms over illegitimate deductions, while others describe it as outrightly insensitive.

However, the discourse has taken a rather ugly turn on Twitter when two legislators engaged in a heated exchange over some exemptions in the E-Levy law.

This acrimony between both sides was glaring from the jump.

But the latest incident was caused by a comment by the Telecommunications Chamber CEO, Kenneth Ashigbe, who asserted on Joy FM that the deductions affected some transactions including the payment of church tithes.

“So far as the law is concerned, you’re paying from a personal account to a Corporate, i.e if the church is registered as a corporate. The law doesn’t exempt Corporate Mobile Money, so it will still attract it,” Mr Ashigbey said on Joy FM‘s Super Morning Show.

“You are the person paying your tithe so the burden of the payment on the transfer is on you who is paying. The person paying apart from paying the tithe will have to pay government some taxes so far as the law is concerned.”

Ningo-Prampram Member of Parliament, Sam George, who had been of firm opposition to the initiative, felt he had been vindicated by this comment.

In a tweet, he told Deputy Finance Minister, John Kumah, that “square pegs have no place in round holes.”

“When we are talking IT deployment, kindly do us a favour and keep quiet. You make more sense that way,” he wrote on Monday night.

But the Deputy Finance Minister would have none of that as tempers continued to flare.

In a sharp rebuttal, he took on the NDC MP, saying “you have brains, use them.”

“Whether E-levy affects tithe, or not is not an issue of IT deployment, it is common sense.”

He further argued that Mr George was deliberately peddling falsehood “because we are not taxing people for paying tithe, offering and Zakat.”

“We are taxing people for using an online platform and if in the course of paying their tithe, they are taxed for using a platform, you can’t ignorantly say one is taxing tithe, offering and Zakat. Again, most Faith Based Organizations make use of merchant momo numbers, which are exempted from the E-levy, which you know; so, why this hypocrisy from you?”

All these he believes smack of unpatriotism on the part of Sam George.

But the NDC MP would still not take this lying. He returned on Tuesday morning with a scathing jibe at the Mr Kumah saying; “I do have brains. I also do use it.”

“You claimed in a very bellicose manner that tithes wouldn’t be affected by e-Levy & that I lied. Now the Chamber say you lied! Which IT community? The rented one which got exposed yesterday? Now please do you have a brain?” he quizzed.

It is public knowledge that Sam George is a worshiper with the Perez Chapel. The Deputy Finance Minister used this place of worship as an analogy in drumming home his apprehension of what he sees as the former’s grand scheme to court disaffection towards the government.

In a fresh response, he told Mr George that “should you decide to pay your tithe, you will use their momo number(ID 443765) which is a merchant number.”

“So E-levy won’t apply. Yet again, you have refused to use your brains and remains unrepented in your desire to always tell lies.”

But Sam George insists that the Deputy Minister is not abreast of the issues in the Minister which he assists to supervise.

“Does having a Merchant number exempt one from the e-Levy? No! And you are supposed to be the Deputy Minister of Finance? The Merchant must be tax compliant before an exemption applies. PCI is supposed to be tax exempt. Learn!” he replied in another tweet.

Meanwhile, the Ghana Revenue Authority (GRA), has indicated that the E-Levy first month of the tax will be mobilized in a modified-phased approach.

Below is a breakdown of how it will be implemented.