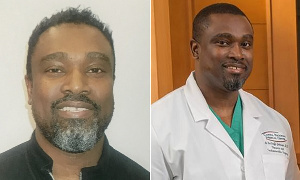 He moved from Ghana to the US with his family in the 80s Moses deGraft-Johnson, a Ghanaian native who came to America as a child and rose to prominence in the medical world, has been sentenced to seven years in prison.

According to a report by Tallahassee Democrat sighted by GhanaWeb, deGraft-Johnson, was a one-time jet-setting heart surgeon who walked away with millions of dollars for medical procedures he never performed.

The report stated that, Chief U.S. District Judge Mark Walker, who imposed the punishment during a hearing Thursday, November 18 at the federal courthouse in Tallahassee ordered the accused to pay $28.4 million in restitution — the same amount he bilked from the government and private insurers.

In February 2020, Moses deGraft-Johnson, was indicted on 58 counts of healthcare fraud. He was accused of ripping off Medicare, Blue Cross Blue Shield and others by billing for expensive procedures he never performed on his underprivileged patients.

Federal prosecutors, the report said alleged he also subjected his patients to unwarranted angiograms, a diagnostic procedure requiring an injection, though his defence lawyers contested that.

Judge Walker, then ruled that, deGraft-Johnson performed such procedures but that the risk of harm to patients was minimal.

Under the US federal guidelines, deGraft-Johnson faced a sentencing range between roughly 22 and 27 years in prison, plus an additional two years.
However, prosecutors said he deserved a downward departure from the guidelines.

Judge Walker agreed. He said the accused was cooperating with the government, and his supposed clean record and the “collateral damage” he and his family have already experienced.

Moses deGraft-Johnson, when he was interdicted in 2020 surrendered his medical licenses after he pleaded guilty. The court forced him to sell off expensive properties in New York City, the Hamptons and Miami.

DeGraft-Johnson made it known to the court that his children have suffered setbacks in school since his arrest.
“I wrestled with this case,” Walker said. “There are certainly significant aggravators in this case — the duration of the fraud and the scope of this fraud. There’s just no getting around it.”

On the final day in court, the accused who was in handcuffs and leg shackles, acknowledged his guilt as he stood before Judge Walker while delivering his judgement. He said he could not, however, offer an explanation for what he did.

“I take full responsibility,” he said. “I did wrong. All I can say is I’m very sorry. Somehow I took a detour and ended up where I am.”

The U.S. Attorney’s Office said Moses deGraft-Johnson performed hundreds of “unnecessary and invasive” procedures for nearly four years and created false and misleading medical records that could cause other doctors to pursue a “mistaken course of medical treatment.”

“This physician compromised the health and safety of his patients in favour of illegal profit,” Acting U.S. Attorney Jason Coody said in a prepared statement. “His acts not only violated the law, but the trust of his patients.”

Moses DeGraft-Johnson, the accused and his family, who have distant connections to Ghana, left the West African country in the 1980s and settled in Texas.

His parents were pastors; two of his three siblings became doctors and the other a nurse, his lawyer, Mark O’Mara of Orlando, wrote in recent court filings.

The accused performed the first open-heart surgery in the Virgin Islands and reportedly saved the life of rapper 50 Cent after he was shot in 2000 in New York City. He joined Capital Regional Medical Center’s staff in 2014, working as an independent doctor, and opened his own business, the Heart and Vascular Center of North Florida.

“While (he) understands that his behaviour in the instance case paints him in a poor light, he wants the court to understand that for the majority of his medical career he gave all of himself to those who entrusted him with their care,” O’Mara wrote.

His mother and older brother, Dr. John deGraft-Johnson, who also gave testimonials in court talked about their struggles as an immigrant family and how they achieved their goals through hard work. His brother, overcome by emotion, said he would trade places with him if he could.

“Judge, I just ask that you look at the totality of who he is and that he has a family that loves him,” his brother said.
Judge Walker said the defendant’s crimes started with him “playing God” and continued because of hubris and greed.

“His family described the American dream,” Walker said. “And he squandered it.”
DeGraft-Johnson’s charges were the result of an investigation by a number of federal and state agencies, including the FBI, the U.S. Department of Health and Human Services and the Florida Attorney General’s Office. Assistant U.S. Attorney Andrew Grogan prosecuted the case.