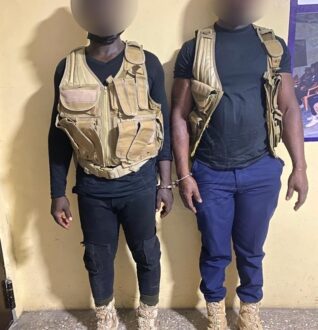 The police have arrested two persons who showed up at the ongoing NPP Constituency Executive Elections wearing clothing that created the impression that they were Police personnel.

According to the Police, the two suspects, identified as, John Essel Baah and Enock Kwame Bosompem, were spotted on Thursday, April 28, at the Okaikoi South constituency where the voting was taken place.

“We would like to emphatically state that the two suspects are not Police officers. Meanwhile, they are in custody as the investigation continues,” the Police said in a statement signed by the Director-General of Public Affairs, DCOP Kwesi Ofori.

The Police assured that the two will be taken through due process.

They claim over 413 names have been deleted from the register, adding that people from other constituencies have rather been included in the album to partake in the exercise.

They also alleged that some members of the National Democratic Congress (NDC) have been added to the register to increase the fortunes of some aspirants.

Speaking to JoyNews’ correspondent, Kwesi Parker-Wilson, on Thursday, they swore to fight for their rights until the right thing is done.

According to them, the old album which includes their names should be used to conduct the elections.