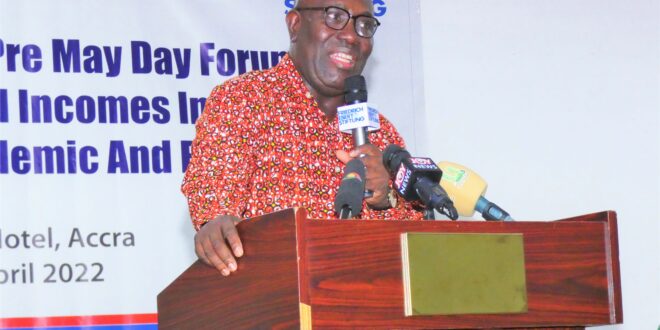 The Trades Union Congress (TUC) has asked the government not to blame the high rate of unemployment, poor remuneration and economic challenges on the Covid-19 pandemic and the Russia invasion of Ukraine.

It said all those problems were already prevalent and in the country long before these challenges started and that was a well-known fact.

Addressing members of the TUC at an Organised Labour Pre-May Day Forum for 2022 in Accra Thursday [April 21, 2022], the Secretary-General of the TUC, Dr Yaw Baah, said although the TUC acknowledged that COVID-19 and Ukraine-Russia impasse had compounded those challenges, it was not right for the government to blame the age-long employment challenges on the two.

The forum was on the theme “protecting jobs and incomes in the era of COVID-19 pandemic and beyond.”

He said it was no secret that remuneration for majority of workers had been bad for many years and so it was understandable that anybody would blame COVID-19 and the Russia-Ukraine war for those situations.

“That is so because a reduction in exchange rates results in frequent rise in goods and services because most of these products are imported with foreign exchange. This phenomenon affects the value of workers’ remuneration.

“Inflation is another issue, the prices of goods and services are going up and so if salaries are not adjusted to reflect these phenomena, then workers would continue to struggle.

Similarly, he said Covid-19 pandemic and the Russia-Ukraine war could not be blamed for the country’s current economic challenges.

“The job crisis did not start with Ukraine. The job crisis predates the Ukraine war. It came before Covid-19, therefore we think it is not right to blame Ukraine and Covid-19 for every job crisis we have in this country.”

Dr Baah underscored the need for government to collaborate with partners in finding a long lasting solution the country’s unemployment rate and other labour issue affecting the country.

Government officials have in recent times blamed the increasing inflation and the depreciation of the cedi among others on the negative effect of the COVID-19 pandemic and the Russia-Ukraine war.

Do or die Affair

On member-welfare, Dr Baah said the TUC dialogued with government and employers to negotiate better conditions of service for its members.

However, he said certain groups of workers received between 25 and 30 per cent increment during the same period, far higher than the inflation rates and that he said was no longer acceptable.

“This year what we are saying is that we are not accepting those per cent ages in 2022 and beyond. Remuneration must reflect inflation rates. But if we speak and the government and employers do not hear us, then we would do what unions do.

“The disparity is not fair because it favoured a few over the majority. We are saying that inflation has devalued the salaries of majority of workers and so we are asking government and employers to raise salaries to reflect inflation rates.

“As a result this year’s minimum wage negotiation is a do or die affair. We have started, they said we should submit the names of our technical members to the government for the technical process to start ahead of actual negotiation and that we have done.

“The issue of TUC is just one and it is that the government and other employers should not pay wages that do not reflect inflation rate or is lower than inflation. And that is our key message for the negotiations,” he said.

“We hardly embark on strike because it is a very difficult thing to do. It is like war, so before we declare war we have to make sure we have a good reason. This time we have a good reason to do this. The workers of this country are suffering too much, and we should not allow it to continue,” he said.

Dr Baah said that was the reason the TUC had for the last 30 years decided to rely a lot more dialogue in addressing our challenges rather than fighting and talking its way through.

He said it was the reason the government always wanted to talk with the TUC but said unfortunately when the TUC talked the government listened but did not hear.

“Those who are in charge of this country must know that without workers, this country cannot progress. Therefore, this is the time to know that whatever they can do to support us, they should do it,” he said.

Dr Baah said while People work to secure their incomes and achieve good standards of living for themselves and families, the TUC must also work to make its members see its relevance.

He said the TUC had intervened in cases of wrongful dismissal and other occupational challenges faced by members and ensured their reinstatement.

He said actions like that established the relevance of the TUC in it members and potential members.

“Comrades, this is what the TUC has to be doing so that every member of our union will see the relevance of the TUC wherever they find themselves.