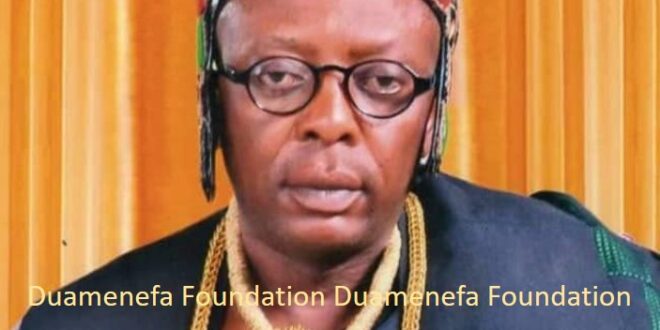 TRADITIONAL PRIEST ALLEGEDLY CAUGHT IN THE WEB OF TRIAL BY ORDEAL

Trial by ordeal was an ancient judicial practice by which the guilt or innocence of the accused was determined by subjecting them to painful, or at least an unpleasant, usually dangerous experience.

The practice was outlawed and termed an affront to the 1992 constitution of the republic of Ghana.

Meanwhile, a fetish priest, a resource person and a frontline interventionist and registered member of the Duamenefa Foundation who used to educate the public on the Duamenefa Social Intervention Program of Fafaa 100.3 FM on matters of dehumanizing traditional practices and beliefs, Hunor Togbi Gbeti was allegedly caught in the web of trial by ordeal.

In a viral video circulating on social media and sighted by Fafaa FM, Togbi Gbeti subjected a young girl of about 13 years of age through the ordeal.

He tied her hands to her back and used the same rope to tie her neck to an object buried underground.

In the said viral video, the fetish priest was heard commanding the young girl to pull out the object.

The viral video was introduced by a fetish priest who spoke to condemn the act.

He asked if this video caught the attention of the Chief Executive Officer of Fafaa 100.3 FM , Mr. Ketaman, who use to engage the services of Hunor Togbi Gbeti to denigrate the dehumanizing practices of some voodoo practitioners.

This necessitated the investigation team of Fafaa FM to launch an independent investigation to unravel the mysteries behind this unfortunate development.

Hunor Gbeti was contacted by Fafaa FM to respond to his actions contained in the said viral video.

He alleged that he was contacted by one Mr. Emmanuel of Abor Mamidome, whose Ghc 1,300.00 was allegedly stolen by the victim, an allegation Emmanuel confirmed to Fafaa FM.

Togbi Gbeti claimed he regretted his action, according to him, the incident happened almost three years ago, but he mistakenly leaked the video to the public domain on the 2nd day of June, 2022. That he was trying to use the process of trial by ordeal to compel the young girl to own up and refund the money to Emmanuel, even though he is aware that the constitution of Ghana frowns at the practice, he did not intend to harm the victim.

The investigation team followed up to Abor, Mamidome, where Madam Ametepe Havor, the mother of the victim was questioned on why she allowed her little daughter to be subjected to such a dehumanizing agony.

Madam Havor alleged that she has nobody to speak on her behalf, hence when her daughter was accused of stealing such an amount of money, she has no choice but to agree with Mr. Emmanuel and his family to lead them to Hunor Gbeti for the attestation through trial by ordeal.

The Executive President of the Duamenefa Foundation who doubles as the CEO of Fafaa 100.3 FM, Mr. Emmanuel Ketaman Evortepe, on behalf of his board of governors in no uncertain terms condemned the intent and purposes of Hunor Togbi Gbeti.

The Duamenefa Foundation of Fafaa 100.3 FM is Non-Profit Organization vested with the mandate to investigate and intervene to rescue the vulnerable whose human rights are being trampled upon through outmoded and dehumanizing Christian and traditional religious practices and beliefs.

The Foundation has over twenty-seven thousand, three hundred and forty-five (27,345) registered and certified volunteers (still counting) who are scattered across the various districts and communities of the Volta Region of Ghana.

Its members are mandated to promote peaceful coexistence through social intervention programs.