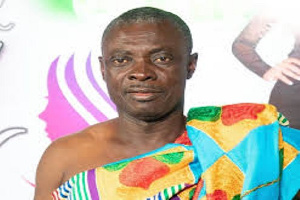 The Founder and General Overseer of the Life Assembly Worship Centre, Reverend Christian Kwabena Andrews, popularly known as Osofo Kyiri Abosom has noted that the self-styled evangelist and prophet, evangelist Elijah, Elisha Nsuobeyeboaden who dug his mother’s grave could be mentally unstable.

Evangelist Elijah 30, in a bizarre manner, dug his mother’s grave and removed the body that had died and been buried a year ago claiming that his mother was appearing to him in his sleep.

The self-styled man of God added that his late mother has been telling him that she was alive and had instructed him to exhume her.

He told residents in the area that he was also instructed by God to dig the grave and remove the body because he (God) was prepared to resurrect his dead mother.

But reacting to the issue, Osofo Kyiri Abosom said God does not give such strange directions to his servants.

Speaking on Nyankonton Mu Nsem on Rainbow Radio 87.5Fm, the man of God said the so-called evangelist must be subjected to a mental evaluation.

He said these were some of the things that give men of God bad names and it was about time it ends.

He added that they are genuine men of God who are truly called by God and Ghanaians must be able to distinguish them from the bad ones.