Breaking News
Home / NEWS / ‘The headteacher is one of us, we’ve forgiven him’ – Families of 9 drowned students 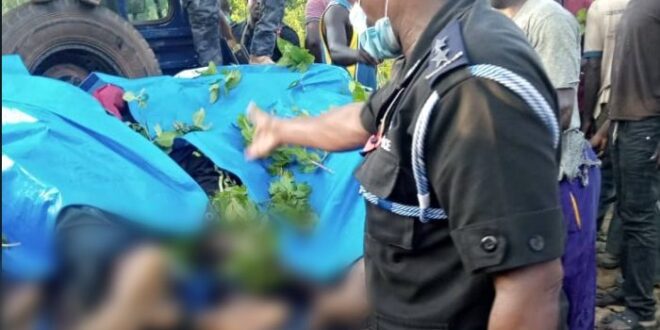 ‘The headteacher is one of us, we’ve forgiven him’ – Families of 9 drowned students

The families of the nine students of St. Charles Junior High School who drowned in the River Oti at Saboba in the Northern Region, are not interested in making the Headmaster of the school, Emmanuel Jashain pay for the death of their loved ones.

This was disclosed by the Spokesperson of the families, Jesse Nyimakan on  Eyewitness News on Monday, November 15, 2021.

According to him, the harm has already been done, and holding grudges against the headmaster will not correct it in any way.

He added that the family is not interested in pursuing the case although the state has by itself pressed criminal charges against him.

“We were hit by this news on Friday. It was a big blow to us. We were thrown into a state of confusion. We haven’t had it easy at all these past days. But then it has happened already..”

“We believe that even if the teacher hadn’t sent them to his farm, they would have been called by God on that day either way. Perhaps that was the day they had to go. In fact, the family is demoralised but what do we do, the headmaster is one of us.”

“We have been with him for a while now and he hasn’t exhibited any untoward behaviour. We believe it is not his doing that this happened. The family has come together and decided to let it go, though we are deeply hurt. I lost my son too. He was about 18 years. But the harm has already been done. Even if the case is dragged, we are unwilling to collaborate with the court,” he added.

The Headteacher has been remanded into prison custody over his alleged role in the drowning incident that left nine students dead.

The headteacher is alleged to have sent thirty-one students to work on his farm last week Friday, and on their return, the canoe they were travelling in capsized, leading to the death of the nine.

It is against the Ghana Education Service code of ethics for headteachers or teachers to use students for their personal assignments.

The accused has since been charged with manslaughter, that is ‘a crime of killing a human being without malice, aforethought or in circumstances not amounting to murder.’

At a Tamale District Court where the case was called on Monday, November 15, 2021, the defence counsel pleaded with the court to grant his client bail, arguing that the accused voluntarily submitted himself to the police hence had no intention to jump bail should he be granted.