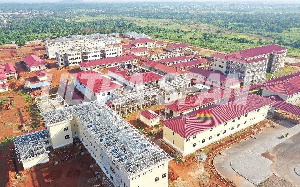 The opposition National Democratic Congress (NDC) in the Ashanti Region has urged President Akufo Addo’s government and the New Patriotic Party (NPP) to explain to the whole world why he has abandoned all the projects initiated by former President John Dramani Mahama.

In a statement signed by the Regional Communication Director Abass Nurudeen sighted by MyNewsGh.com, he observed that it is unfortunate that President Akufo-Addo has nothing substantial to show for the 5 years he has bee in office in the region which has largely been described as the Political stronghold of the New Patriotic Party (NPP).

According to the statement “In the run-up to the 2020 elections, President Akufo-Addo in his desperation for re-election, is purported to have cut sod for the commencement of the Boankra Inland Port and the 83.5-kilometer standard gauge railway line from Kumasi to Obuasi”.

“This has turned out to be one of the greatest Political deceptions of the 21st century, as there is nothing to show at these sites almost one year down the line. We expect President Akufo-Addo to offer an unqualified apology to the Asantehene Otumfuo Osei Tutu II in particular and the inhabitants of the Ashanti region for this great deception” the statement stressed.

“Ghana’s center of commerce continues to reel under the incompetent economic management of the Akufo Addo-Bawumia government occasioned by the recent introduction of killer taxes, unannounced increase in prices of petroleum products, steep depreciation of the cedi and the closure of land borders with neighboring countries.

These factors have conspired to raise the standard of living to unacceptable levels in the region and also to create an unfavorable business environment leading to several Ashanti businesses either folding up or almost on the brink of collapse.

The poultry industry in the Ashanti Region has been brought to its knees owing to the shortage of maize which is a key ingredient in the preparation of poultry feed. The good people of the Ashanti Region want to know what has become of the much-touted “Planting for Food and Jobs” policy, which was supposed to boost the production of cereals of which maize is an integral part”, the statement added in part.

The NDC also demanded to know the fate of projects initiated by the erstwhile Mahama administration currently left to rot at various stages of completion.

“President Mahama, on his recent Than You tour of the Ashanti Region, touted his unmatched developmental track record like The Kejetia Central Market Project, The Kumasi Airport Project, Rattray Park, Konongo-Kumawu-Kwahu water Project, 500-bed Afari Military Hospital, 12—bed Fomena District Hospital, 120-bed Kumawu District Hospital, 250-bed Ashanti Regional Hospital, 14 brand new Senior High Schools to mention a few. We expect President Akufo-Addo to tell the whole world why he has abandoned these hospital projects at the time the people are seeking quality Healthcare and how he has used the over 300 billion borrowed so far to impact the lives of the people in the Ashanti Region”, they demanded.