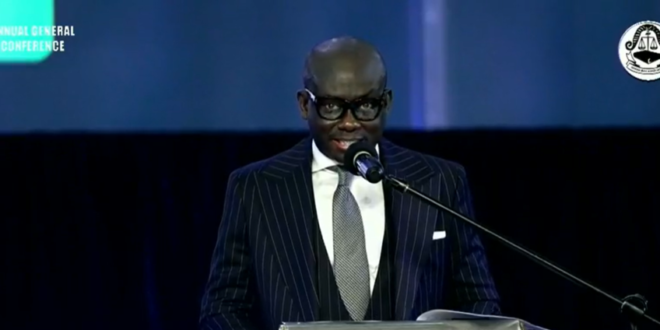 The Attorney-General and Minister for Justice has proposed a live telecast of all court cases of national importance apart from election petitions.

Godfred Yeboah Dame at the opening of this year’s Bench, Bar and Faculty Conference on Thursday, observed that some lawyers disseminate falsehoods about the judiciary on social media after losing a case.

Citing the case of Akoto and Tuffour v Attorney-General, Mr Dame said even though some lawyers were quick to jump on social media to “propagate what sometimes, is falsely portrayed as academic critique, they are loath to engage in a real scholarly examination of judgments of the Superior Courts.”

Therefore, his recommendation was to assist in curbing what he described as unacceptable practices in the legal fraternity.

According to him, the move will also enable the citizenry to decipher the arguments presented by legal practitioners and why adjudicators make certain judgments.

“Reflecting on these unhealthy developments I have spoken about, My Lord Chief Justice, sometimes I really think the way to go is to permit more broadcasts of cases of immense national importance and not the election petition alone.

“When this is done, the poverty of legal reasoning behind certain cases dismissed by the Supreme Court and in respect of which the state emerges, the victor will be exposed for all to see,” he said.

Mr Dame further admonished lawyers who peddle falsehoods to desist from the act.

According to him, the obnoxious practice will affect the credibility of the country’s courts.

“Spread of false information by lawyers, disregard for the cherished values of the legal profession and the promotion of instability and violence, apart from being disreputable, poses a far greater threat to cohesion in society if it comes from lawyers.

“Such conduct should result in promptly inflicted sanctions on the lawyers in question,” he was categorical.