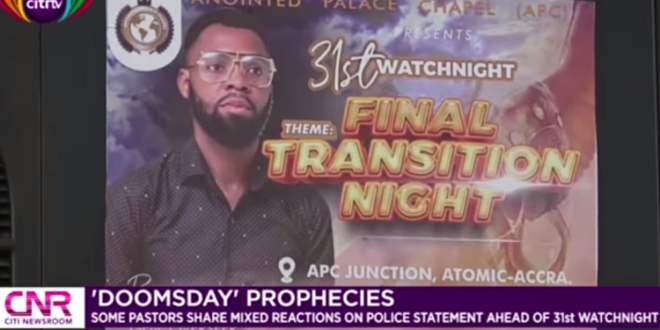 The directive from the Ghana Police Service urging churches to be measured in the communication of prophecies that could spark panic and controversy has been met with mixed reactions by some religious leaders.

As some leaders are in support of the advice others argue that it is a move to gag prophets in the country.

Most Rev. Dr. Kwabena Boafo, Presiding Bishop, Methodist Church of Ghana told Citi News that “the ethics of the profession must be allowed to be at play here. Like a doctor, you can’t just come out announcing that a patient is going to die. This will stir up unnecessary fear and panic. There should be a more tactful way of going about it.”

“If they think that going ahead to announce it is the way to go, then they should be ready to prove it. And if they are unable to prove it, it’ll make the issue quite dicey and I agree with the posture the police has taken,” he added.

“Oh yes, I side with the Police. Of course they are not barring prophecies. They are only advising or cautioning these religious leaders to prepare to face the consequences of prophecies they may give that can cause fear and panic. Even the Bible charges us to conduct ourselves in a manner worthy of the gospel,” Dr. Steven Yenusom Wengam, Lead Pastor of Cedar Mountain Chapel International said.

The General Overseer of the Anointed Palace Chapel, Rev. Obofuor also commended the Ghana Police Service for the caution saying it is “good that they issued such a message”.

But others disagreed with the warning.

Prophet Nigel Gaisie, founder and leader of the Prophetic Hill Chapel somewhat disagreed with the directive but said they will abide by it.

He said he already has 42 prophecies for the country which he would release during the watch night service.

“Prophecy was and is and will forever be. Personally, I think modern day prophets are law abiding so we will go by what they (police) are suggesting,” he said.

The police have urged religious groups and leaders to be measured in the communication of prophecies ahead of the 31st December watch night services.

With the public interest in mind, the police stated that religious freedom is still subject to Ghana’s laws ahead of the watch night services, which are known for delivering prophecies by men of God.

The Odorkor branch of the  Glorious Word and Power Ministry, church was vandalised after the head pastor of the church, Rev. Isaac Owusu Bempah incurred the wrath of some Muslims after a prophecy that the Chief Imam could die in 2019.

A person found guilty under these laws could be liable to a term of imprisonment of up to five years.