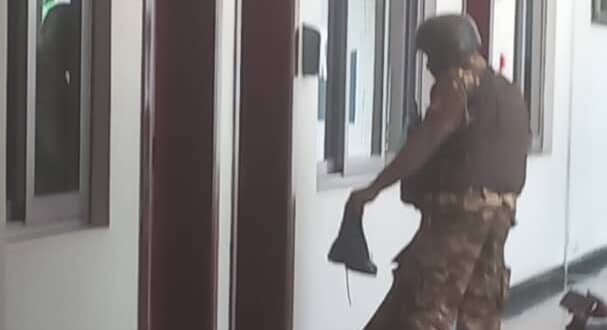 Fear, panic, and pandemonium gripped the Law Court Complex in Accra Wednesday when a prison warden accidentally discharged his weapon in a courtroom.

The incident happened at the Criminal Court 5 which is on the fourth floor of the court complex during the hearing of the trial of four persons alleged to have kidnapped some two Canadians.

There was panic immediately the gunshot was heard with people in the courtroom taking cover and running helter-skelter.

The prison warden who accidentally discharged his weapon is part of the team that brings remand prisoners to the court for trial. 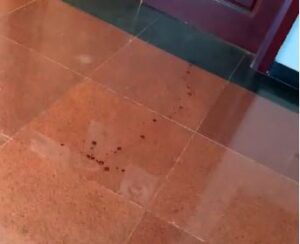 PHOTO: Bloodstains could be traced from the courtroom on the 4th floor of the building down to the clinic on the ground floor.

A source told Graphic Online that the prison warden is currently in hospital receiving treatment.

“He sustained serious injuries and was sent to the Law Court complex clinic. But he has currently been sent to the hospital,” the source said.

Graphic Online’s Justice Agbenorsi reports that investigations are underway into the incident.

The Judicial Service has, therefore, assured the public of their safety in and around the court as security measures were being undertaken to avoid a recurrence.

This was contained in a press statement signed and issued by the Judicial Secretary, Justice Cynthia Pamela A. Addo on Wednesday (Feb 23, 2022).

It stated that the Chief Justice, Justice Kwasi Anin Yeboah’s attention has been drawn to the incident adding “This is the first time such an incident has occurred within the courts thus likely to cause fear and panic.”

“However, the general public is hereby informed that thorough investigations are underway, whilst security measures are being put in place to avoid a future occurrence,” the statement added.