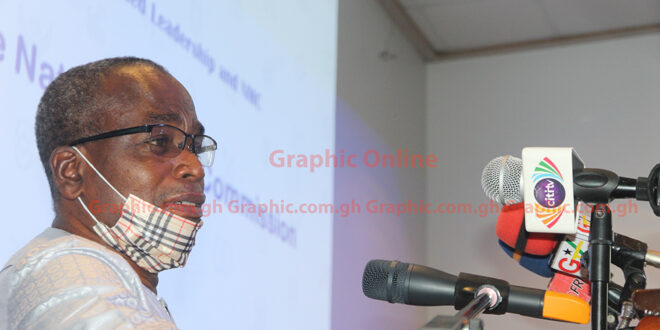 The Chairman of the National Media Commission (NMC), Mr Yaw Boadu-Ayeboafoh has observed that the public debate on LGBTQI+ in Ghana, has sometimes been more about sentiments than rationalism.

At a meeting with the expanded leadership of Parliament on Thursday (October 28, 2021), Mr Boadu-Ayeboafoh likened the situation to the fate of the NMC, where he said one of the most unfortunate developments was when people misread the provision in the 1992 constitution which says that the NMC shall take all appropriate measures to ensure the highest journalistic standards and professionalism in the media.

He noted that the assumption was that the commission has the power to do anything to ensure this, which was not the case.

He added that it was even more painful when members of parliament tend to resonate with this misunderstanding of the provision of the law.

“When people speak this way, the intention is that the NMC is not cracking the whip but nobody has given the whip to the NMC to crack,” he added.

He said this was a country of rule of law and the NMC could therefore not carry out mandates which it had not been empowered by law to do.

“This is a country of the rule of law and anything that we do, must be founded in Law,” he added.

It was when he was citing an example to buttress an appeal for Parliament to review and amend Act 445 of 1993, so as to empower the National Media Commission (NMC) to enforce its mandate that Mr Boadu-Ayeboafoh chipped in the LGBTQI+ example.

“Just like our agitation over the LGBTQI+ debate, where sometimes sentiments are more than             rationalism in the way that the debate goes.

“When you have that kind of situation and particularly, when that murder took place at Kasoa, when that young boy was murdered and the police did not do a thorough job and they concluded in that statement that the boys said that they did what they did because of something that they watched on television,” he added.

“Everybody then turned to the National Media Commission and everybody was berating us left and right to say that what are you doing? And they read this provision that says that you take appropriate measures and their conclusion is that we can close down the station and we are not closing down the station and we know that we do not have that power and authority to close down that station,” he added.

He said sometimes it is not out of anything except that in the thinking of the framers of the 1992 constitution, “we [NMC] needed to facilitate media pluralism, rather than control and that is why the NMC don’t have the powers of closing down stations.

Mr Boadu-Ayeboafoh said if after working with the constitution for these number of years and we realise that the time has come for us to put in measures that will not just tolerate anything but we deal firmly with that situation, then the commission must be given that power and authority and that power can only come from Parliament otherwise the commission cannot take upon itself any obligation.

He reiterated that the NMC is of the view that the current law that established it only allows it to order irresponsible media houses to apologize and retract their publications.

It is therefore asking for more powers to be able to introduce stiffer punishment for media houses that publish false and inappropriate content.

The meeting with the parliamentarians, organized by the Ministry of Parliamentary Affairs with the NMC discussed issues about accelerating the enactment of laws affecting content delivery across platforms including the passage of the broadcasting law, enacting a new law on complaints settlement, a new law on the fairness doctrine for state-owned media and budgetary resources.