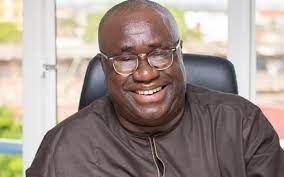 ‘Sekondi-Takoradi MCE should give Akufo-Addo a free hand by quitting his job’ – Prof. Aning

The Director at the Faculty of Academic Affairs and Research at the Kofi Annan International Peacekeeping Training Centre (KAIPTC), Prof. Kwesi Aning is demanding the resignation of the Sekondi-Takoradi Metropolitan Chief Executive (MCE), Abdul Mumin Issah.

Speaking on Top Story, Friday, Prof. Aning noted that the act by the MCE undermines the national security strategy to ensure safe governance.

According to him, the situation demands that government institutes more effective political security education to avert future occurrences.

“The man should be out of office. I mean he shouldn’t wait for the President to suspend him. I think he should give the President a free hand by quitting his job,” he told Evans Mensah.

He said the arrest of the MCE who doubles as the Chairperson of the Western Regional Security Coordinating Council sends a strong signal to the political class that they cannot transcend the laws of the country.

Prof. Aning explained that the action taken by the police to an extent denounces the misconception as to how power trickles down between political heads and the security heads.

“I think what Mr. Dampare has demonstrated is that although we must all be pulling in the same direction, we pull in that direction predictive of the rule of law and the respect for human rights. The fact that you are paid or you have your own money is nobody’s business,” he noted.

Abdul Mumin Issah was arrested on Thursday and charged on three counts of assault of a public officer, offensive conduct conducive to breaches of the peace and disturbing the peace in a public place contrary to Sections 205, 207 and 298, respectively, of the Criminal and Other Offences Act of 1960, Act 29.

On Friday morning, Abdul Mumin Issah was put before the Takoradi Circuit Court ‘A’. He pleaded not guilty to the three charges levelled against him.

At the end of proceedings, he was granted a GH¢100,000 self-recognisance bail with three sureties. The case was adjourned to March 17, 2022.

He has since been suspended from office pending an enquiry into the matter.

In a statement, the Minister for Local Government, Decentralisation and Rural Development, Dan Botwe stated: “On the instructions of the President, the Metropolitan Chief Executive for Sekondi-Takoradi Assembly, Mr. Abdul Mumin Issah has been suspended from office with immediate effect pending an inquiry into his encounter with the Police on February 3, 2022.”