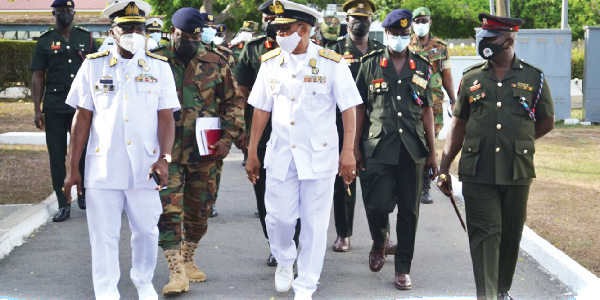 The West Africa region is a focal point of old and new forms of armed conflict and this includes violent extremism, organised crime, piracy, unrest due to social inequality, land use conflicts and election-related violence.

In three years, the region has suffered more than 5,300 attacks which have been blamed on terrorists, resulting in about 16,000 deaths and more displaced people. Between January and March, more than 840 attacks took place in the sub-region and this calls for greater intelligence sharing to better monitor jihadist groups.

Many of these security challenges cannot be resolved with national measures alone. They require regional responses, coordinated by the Economic Community of West African States (ECOWAS).

These problems affect the ECOWAS institutions, its member states and civil society organisations in West Africa. In some cases, for example, they do not have sufficient institutional and operational resources to implement political framework documents and strategies for managing conflicts and protecting the populations in a collaborative and coordinated manner.

Following the upsurge of these violent attacks in the sub region coupled with the recent killing of eight soldiers in an attack in northern Togo, which marks potentially the first deadly raid on its territory by Islamist militants whose activities have claimed thousands of lives in neighbouring countries, Chiefs of Staff of the Community of West African States (ECOWAS) held a two-day meeting in Accra, Ghana, to debate defence and security matters and means of strengthening military cooperation in the region plagued by growing insecurity.

Mali, Burkina Faso and Niger are grappling with jihadist insurgencies and neighbouring states such as Ghana, Benin and Côte d’Ivoire are worried about spillover to their borders.

Addressing representatives of the Joint Chiefs of Staff in Accra, Ghana’s Defence Minister Dominic Nitiwul spoke of armed and criminal groups fueling the rise in insecurity, underlining that the sub-region had been saddled with complex transnational crimes committed both in the physical and cyber domains.

“Terrorist activities have taken cross border dimensions with far reaching implications for civil societies, regional security and global peace and development” he said and therefore, called for more intelligence sharing to better monitor terrorist groups. “As professionals, we must resolve to bury our differences imposed by nationality, culture ethnicity, language, religion and forge ahead with greater collaboration,” he insisted.

Currently, he said, there was a limited collaboration among various national intelligence agencies across the sub-region that had resulted in a serious limitation in the fight against the activities of terrorist armed groups, and violent extremist organizations.

“These groups rather have increased collaboration and information sharing across national borders in a bid to outwit security forces and impose their will on the population,” he added.

“The maintenance of peace and security in our various jurisdictions remains a critical challenge and as Chiefs of Defence Staff in your respective countries you have a pivotal role to play in shaping the defence and security policies needed to achieve regional peace and public safety,” he maintained.

Mr Nitiwul said it was necessary to bridge the gaps that existed in information and intelligence analysis, to pave way for better integration for effective political, social and military direction. “This is a good way to do things, to make sure we work together to stop the threat of terrorism in our sub-region,” he added.

After military coups in Mali, Burkina Faso and Guinea, ECOWAS suspended these countries from its bodies and imposed economic sanctions but representatives of the three countries attended the meeting because of the urgency, Nitiwul said.

A jihadist insurgency by fighters affiliated with al-Qaeda and the Islamic State group has spread from northern Mali to neighbouring Niger and Burkina Faso.

In Burkina Faso alone, jihadist attacks have killed more than 1,200 people since 2015 and displaced more than a million and at the end of February this year, the Nigerien President, Mohamed Bazoum, announced that he had begun “discussions” with jihadists to promote peace.

Despite the insecurity challenges West Africa is making impressive progress in economic growth, democratisation and regional co-operation. While the recent rise in violence and conflict as well as drug trafficking, piracy, extremism and other emerging threats have sparked concerns over its future development, efforts to prevent conflicts have also improved, contributing to overall stability.

Development policy has a critical role to play in supporting stability to reduce conflict and violence over the long term. This requires interventions in many areas including support for lagging regions, strengthening local governance, improving land management, and spurring job creation among others.

The ability to project legitimate power, preserve territorial integrity and assure the welfare of the people is the cornerstone of any sovereign state, and the UN rightly places primary responsibility for peace and security with member states. In the developing world of incomplete state formation, weak institutions and competing demands between regime and human security, the state has often failed in this cardinal responsibility.

Collective responsibility by diverse actors has often been called upon either to complement national efforts or to defend and promote human and regional security. In this regard civil society and humanitarian agencies, as well as regional and international organisations play critical roles.