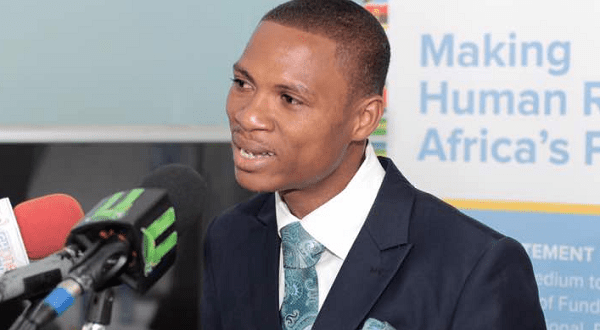 The Ghana Police Service says it has served criminal summons on the Member of Parliament for Madina constituency in Accra, Francis-Xavier Sosu.

The police say Francis Sosu will be arraigned before court on November 8, to face the charges of unlawfully blocking a public road as well as the destruction of public property after he joined his constituents in a demonstration on October 25, over poor roads in Madina.

The police have since been unsuccessful in their attempts to arrest him, with parliament flagging its privileges and requesting proper procedures for MPs who must face criminal prosecution.

The Director-General of the Public Affairs Department of the Ghana Police Service, ACP Kwesi Ofori says the court process has duly been served on the MP and expects to meet him in court to answer the charges.

Meanwhile the Speaker of Parliament has expressed revulsion at what he says are unconstitutional attempts to arrest the MP.

According to him, he has noted “with grave concern” the attempts by the Police Service to arrest Sosu “in a manner and fashion that offend not just the letter but the very spirit that underpins our 1992 Constitution.”

In a statement issued by the Parliamentary Service on Wednesday, the Speaker said he has “also taken note of the press releases and posture of the Police Service including the interdiction of Inspector Daniel Agbavor, the Police Officer providing personal protection” to MP Sosu.

He concludes that while that while the immunities and privileges of Members of Parliament are not absolute, the procedure for causing the arrest of a sitting Member of Parliament or serving a court process must be in accordance with the Constitution and that the “appropriate procedure is to secure from the Speaker, a certificate that the Member in question is not attending to Parliamentary Business. Anything short of this should not be entertained by the House.”

Click the following image to read the full statement issued by the Parliamentary Service. 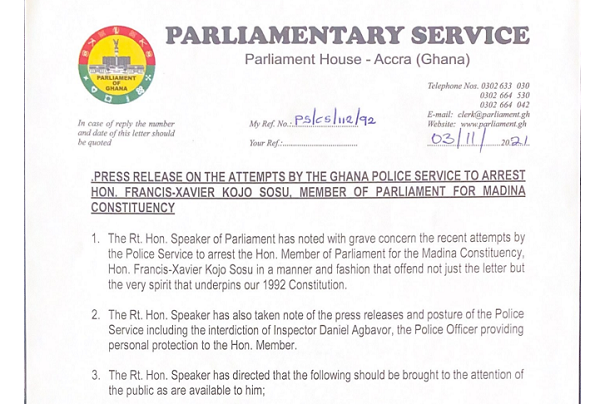