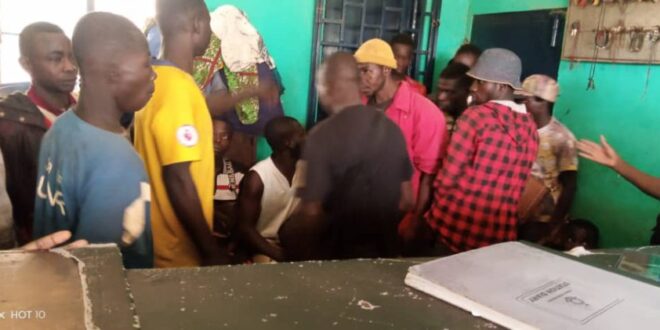 Police in Damongo in the Savannah Region have impounded a Sprinter bus with registration number AS 9399-12 with thirty two passengers on board suspected to be victims of trafficking.

The victims made up of thirty males and two females including a nursing mother were being transported from Yendi in the Northern Region towards Bole and Sawla in the Savannah Region, but upon reaching the Police barrier at Busunu in the West Gonja Municipality, their vehicle was impounded and escorted to the Damongo Divisional Command for further interrogations.

The West Gonja Municipal Police Commander, Deputy Superintendent John Hessey in an interview with JoyNews said his men are working hard to get to the bottom of the case.

According to DSP Hessey, majority of the occupants cannot speak any Ghanaian language but French, hence the reason their place of origin must be investigated.

According to the Police Divisional Commander, “when the Vehicle was spotted at the Busunu barrier and the occupants were interrogated, we realised that the passengers on board are being trafficked because they couldn’t give us any better explanation to where they were going.”

“They only said they are going to Bole to find work to do and we can’t take any chances as we suspect human trafficking. So, they are here for further investigation leading to those who kidnapped them”, DSP Hessey explained.

Three others, Mr. Teninkpa Chierer and Mr. Bande Issifu, both Togolese, including Mr. Kwame Jageri Bekom, a Ghanaian were identified by the suspected victims as their leaders.

For Mr. Teninkpa Chierer, he has been a regular visitor in Sawla and goes there, “every year between January and February, purposely to help harvest cassava, yam at where I’m paid some money. We harvest cassava and process them so that after the month of March, I go back to Togo.

“And, as for the rest, they are also going to do the same job to improve their financial status”, he said.

But when asked how he came by the other thirty-one (31) occupants apart from himself, Mr. Chierer said everyone was on his or her own.

Last year, a good number of people mostly herdsmen were kidnapped in Daboya, Busunu, Damongo and Sawla including Salaga for ransom and only two accused persons were arrested, arraigned and jailed.