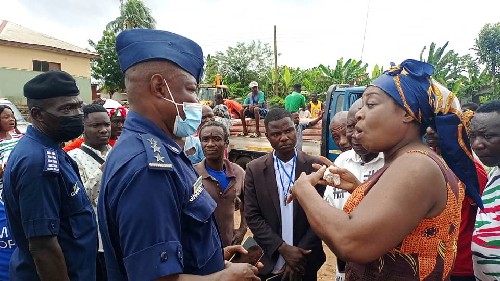 A disagreement over who has the mandate to construct a place of convenience led to a clash between supporters of the ruling New Patriotic Party (NPP) and the opposition National Democratic Congress (NDC) at Agona Kwanyako in the Agona East District in the Central Region last Friday.

Members of both parties stormed the site earmarked for the construction of the project and engaged in heated arguments about which of the two parties had the right to execute the project for the people when the NDC MP for the area, Mrs Queenstar Maame Pokuah Sawyerr, was about to cut the sod for the project to begin.

According to members of the NPP, the contract for the project, which is being funded by the Coastal Development Authority (CODA), had been awarded to a contractor who would begin work soon and would, therefore, not allow the NDC MP to do the project.

On the other hand, supporters of the NDC vehemently protested on the grounds that the government was not ready to execute the project after cutting the sod for the project about a year ago; hence, the NDC MP for the area had come to their aid to reconstruct the project for the people to improve the sanitation situation in the town.

It took the intervention of police personnel from the Swedru Divisional Police Command to calm the supporters down.

In the run-up to the 2020 general election, the then NPP Parliamentary Candidate for the area, Professor Kwesi Yankah, pulled down the old toilet with the promise to reconstruct it.

Work is yet to commence on the project which is putting undue pressure on the only existing public toilet in the town.

Recently, some residents appealed to the MP to come to their aid and reconstruct the project since there were no indications that the CODA funded project would commence anytime soon.

Subsequently, the MP requested for a piece of land from the chiefs who gave her the permission to reconstruct the project at the same place the old one was located.

She, therefore, procured some building materials and arranged to cut the sod for work to begin on the project last Friday resulting in a clash between supporters of both the NPP and NDC.

The District Chief Executive (DCE) for the area, Mr Dennis Armah-Frimpong, upon hearing of the development, visited the site to reiterate the fact that the project had been awarded and that the contractor would move to the site to commence work.

“I expected the MP to enquire about the status of the project after some residents appealed to her which would have prevented the disturbances,” he said.

Speaking in an interview with a section of the media, Mrs Sawyerr said that her priority was to undertake development projects to improve the lives of the people.

She urged the people not to allow extreme partisanship to influence them to resist  development in the constituency.