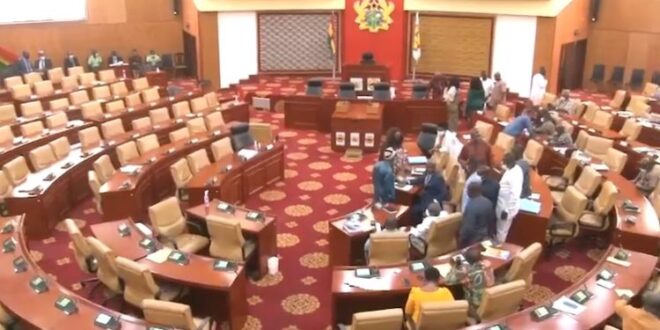 A walkout by the Majority from Parliament on Friday, November 26, 2021, did not prevent the House from continuing with the business of the day.

Members on the majority side staged a walkout after a disagreement over a voice vote which did not go in their favour.

“Clearly, the No’s have it. The motion is accordingly lost”, the Speaker ruled.

Parliament was to conclude the debate on the 2022 budget statement and approve the policy document today.

A last-minute request by the Finance Minister to meet with the leadership of the House was turned down by MPs after the Speaker of Parliament announced that the ‘Nos’ had won the voice vote.

Deputy Majority Leader, Alexander Afenyo Markin, thus challenged the Speaker’s interpretation of the voice vote and called for a ‘division’.

Mr. Bagbin subsequently directed that, per orders of the House, non-MPs had to vacate the Chamber during the division process.

“As the Speaker, I will do all I can, not allow the government to obstruct or frustrate parliament in its lawful duty. That is a pledge to the people of Ghana, and there is a reason why the good people of Ghana elected this parliament. It is hung parliament of 137-137, the independent who decided to do business with one side of the majority, there is no majority party in this house. This is a new beginning, where for the first time, a Majority has walked out from its own business”, Rt. Hon. Alban Bagbin stated.

While vacating the Chamber, the Majority MPs demanded that the General Secretary of the opposition National Democratic Congress, Johnson Asiedu Nketiah, who was sitting in the public gallery at the time, must also exit the House. He ignored this request.

This infuriated the Majority MPs who walked out of the Chamber, leaving only members on the Minority side.

The Speaker of Parliament thus suspended the sitting for five minutes.

He subsequently came back to the House to continue with proceedings.

The Minority caucus in Parliament had vowed to kick against the government’s proposal for a 1.75% tax on all electronic financial transactions.

The tax according to the side is a disincentive to investments and private sector development. Minority Leader, Haruna Iddrisu said the tax will overburden Ghanaians.

“Our concern is whether the e-levy itself will not be a disincentive to the growth of a digital economy in our country. We are convinced that the e-levy may as well even be a disincentive to investments and private sector development in our country… We in the Minority will not support government with the introduction of that e-levy. We are unable to build national consensus on that particular matter,” he said.

Various stakeholders including those in the telecommunications sector have also raised concerns about the policy.

Government in response is expected to engage the telcos on the policy.