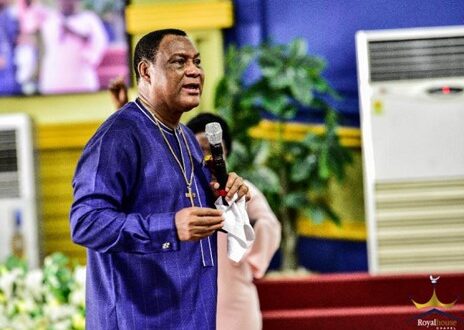 The Founder and General Overseer of the Royalhouse Chapel International, Most Rev. Sam Korankye Ankrah, says the recent arrest of a radio presenter and a social activist for what the police say was the publication of false news amounts to “harassment.”

“We do not support the harassment of journalists who are doing their work to speak truth to power and call power to account,” he stated.

Rev Ankrah said this when a radio presenter of Accra FM, Kwabena Bobbie Ansah, and the Executive Director of the Alliance for Social Equity and Public Accountability (ASEPA), Mensah Thompson joined the church on Sunday, February 13, 2022, to seek prayers.

The two were recently arrested for publication of false news.

Their various cases are still pending in court.

“Two popular journalists also came to the altar today, they are being pursued by the laws of Ghana, also for political reasons and all, they came to seek prayer,” he said while introducing them to the congregation.

He said the two were in church on Sunday with their team and families to seek the face of the altar and he prayed for them, gave a “small exaltation of peace and unity, that those who have been offended must have a place in their heart to forgive.”

“…journalists must be forgiven, doctors must be forgiven, nurses must be forgiven. Some doctors and nurses by some small carelessness, they cost people their lives but it doesn’t mean that they are bad doctors or nurses. Some lawyers slip, politicians slip, everybody once a while you slip but we forgive each other, so we should forgive these journalists so I call upon those who have been offended by some of the things that they have written and they have spoken, and have said. They should find in their hearts to forgive them. We pray that God should take them through this phase of their lives. By the time this phase is over, they should become better citizens,” Most Rev Ankrah said.

“In Royalhouse Chapel you have faithful partners in the liberty of journalism and reportage in Ghana,” Rev Ankrah told the duo during the Sunday church service [Feb 14, 2022].

“It is not going to be an assignment of journalists and the courts only but of every citizen of this nation,” he added.

Rev Ankrah also used the opportunity to call for forgiveness for the two, saying, “let us learn to forgive those who are always on the microphone. The one who goes to the stream to fetch water is the one who gets wet. Within the spur of the moment, we say things that we should not say, but when you are emotionally charged, it happens.”

He further noted that journalists sometimes find themselves in trouble for things they say and write but that should not be used to condemn the profession in its entirety.

He added that “It is the hazards of the work. We should learn to forgive and tolerate them and look at the work that they do for the common good of society and not the small mistakes that they commit.”

Rev Ankrah, therefore, apologised on their behalf to anyone who had been offended by their reportage and prayed for the duo.

“We pray that you dwell in peace, and you will dwell in safety. Ghana will know peace…the oppressor will not prevail…liberty and democracy will thrive but above all development and prosperity for our nation”, the apostle General prayed.

He further called on Ghanaians to hold those in power accountable for their actions and inactions.

“When we vote for them, we will call them to accountability, they would have to account for the power vested in them and the promises that they make for which we elected them.