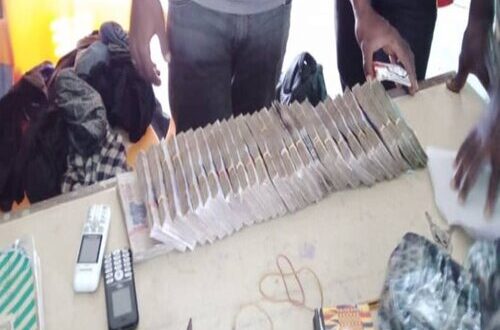 The Immigration patrol team manning the Tatale border has apprehended two Burkinabes at Bitchabe, a border community near Tatale in the Northern Region.

According to official communication from the Northern command of the Ghana immigration Service, the two were arrested after a hot chase through an unapproved route.

The two, whose names are being withheld are said to be 27 and 28 year old male Burkinabes.

This is contained in a statement signed by the Assistant Inspector Christian Kobla Kekeli Zilevu, Public Affairs Officer for the northern command.

The statement said, the officers conducted a search on them and found Twenty-SevenMillion CFA(27,000,000CFA) which is equivalent to Two Hundred and Eighty-Three Thousand Ghana Cedis (GH¢283,000.00).

Upon interrogation, they said they were coming from Togo (Sokode) and transitting to Abidjan (CoteD’Ivoire) for a visit.

They offered a bribe of Two Million CFA (2,000,000CFA) which is equivalent to Twenty Thousand Ghana Cedis (GH¢20,000.00) but the officers declined the offer.

They indicated, when questioned, that they were businessmen who buy rice from Ivory Coast to Togo.

The two suspects are currently in custody pending investigation.