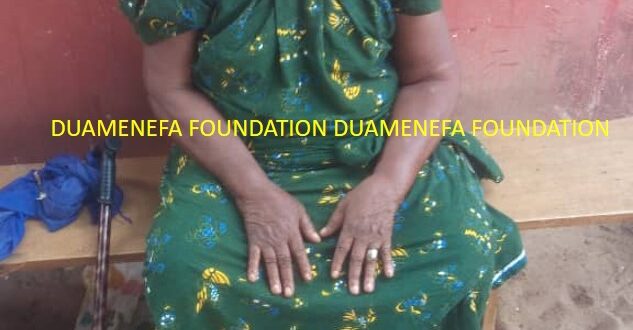 Madam Mihayi Aku Adzayi, mother of Mr. Papaa Atoklo, confessed to Fafaa 100.3 FM that her son has an intimate relationship with Togbi Adama, the chief who allegedly sent her son on a mission to wield a machete to disrupt the registration activities of the Duamenefa Foundation of Fafaa 100.3 FM. 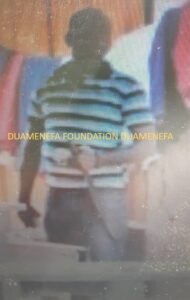 Papaa Atoklo, machete in hand at the Duamenefa Membership registration

Madam Adzayi told the investigation team of Fafaa FM that she has cautioned her son to desist from accompanying this man called Adama on several occasions, but the son would not heed her counsel.

According to Madam Adzayi, there is a long-standing acrimony between the chief of Laƒeto, Togbi Agboka and Togbi Adama faction of chieftaincy, whereas Togbi Agboka was the host to Duamenefa registration team, hence Togbi Adama allegedly plotted this diabolical agenda with her son.

According to Madam Adzayi, Togbi Adama on many occasions would send for her son to accompany him to places such as Aflao and other areas.

She regretted the unfortunate development where it is alleged that this same Togbi had to hire her son to perpetrate such a heinous crime against a benevolent NGO whose track records she has supported for the past eleven years.

According to her, she is a registered and certified member of the Duamenefa Foundation with registration number AG 277, for the past eleven years when the Foundation began its registration exercise with Jubilee Radio, Keta.

She continued to say she has confidence in the peace building and developmental activities of the Foundation and cannot understand why Togbi Adama would send her poor boy to organize hoodlums to attack the registration officials of the Foundation.

It would be recalled that Agbozume, in the Ketu South Municipality of the Volta Region, witnessed a horrific scene on Tuesday, the 1st day of March, 2022, during the ongoing voluntary registration of membership for the Duamenefa Foundation of Fafaa 100.3 FM, when Papaa Atoklo and his co-hoodlums were allegedly contracted by Togbi Adama III to use a machete and stones to disrupt the activities.

It took the timely intervention of the Duamenefa’s professional security officer to disarmed Papaa Atoklo, who attempted to butcher the officials during the process. Although he missed his targets, Papaa Atoklo succeeded in using the machete to destroy the plastic chairs where the Duamenefa registration officials had been seated.

Fafaa FM duly contacted Togbi Adama for his right of response, but he threatened the reporter with a warning not to call his line again.

The matter is, however, reported to the Agbozume police for further investigation and possible prosecution in a court of competent jurisdiction for redress.

Watch out for further details…