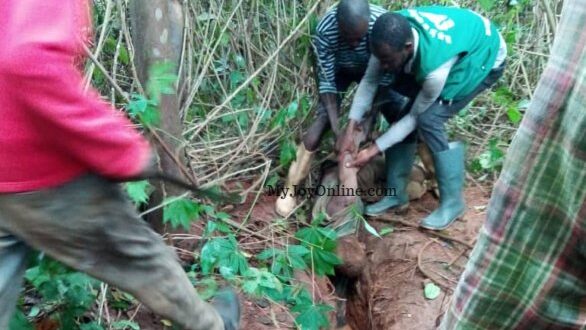 Man who went missing for a week, found with hand stuck in rat hole

A man who went missing for a week was found on Monday in a bush with his one hand stuck in a rat hole at Brekum, in the Bono Region.

An eyewitness, Francis Donkor, narrating the incident to Adom News’ Dominic Donyina, said he overheard Rockson Kwasi Nsiah screaming for help but in a feeble voice, so he rushed to call other people to help save the victim.

According to him, the victim had caught a rat, and it was decomposed, but the deceased could not move the hand and the body out of the rat hole.

He said they poured libation and said prayers to get the hand out of the hole eventually, but unfortunately, Mr Kwasi Nsiah died a few minutes after the rescue.

The father of the deceased, Joseph Osei said, his son came to the farm last week Monday, August 16, with his mother but did not return.

He said because the deceased was not a child, they thought he had decided to sleep at the farm hamlet.

Mr Osei also revealed that the deceased was suffering from a slight mental condition so they later reported him missing at the police station and an information centre to help them in the search.

He added that they mount a search for him even around where he was found, but unfortunately, they did not get any clue of someone in that bush only to hear he has been found stuck in the rat hole.

Some residents who went to the scene expressed grief over the incident and read spiritual meanings into it.

Meanwhile, the police have taken the body for storage and further investigation.