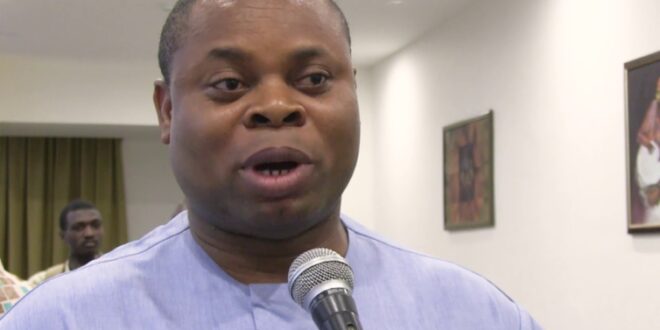 President of IMANI Africa, Franklin Cudjoe has advised government to seek help from the International Monetary Fund (IMF) in the face of the country’s current economic challenges.

In a Facebook post on Monday, the political commentator lamented Ghana’s debt profile and called on government to take a second look at its expenditure.

In his statement, Mr. Cudjoe also urged government to consider seeking help from the IMF to contain the situation.

“We all fall on hard times and need some support from family and friends. .. but Government has driven the country into a debt iceberg and we are sinking with fewer life boats and passerby ships that should care are simply smiling and waving at us.. We need to stop the debt clock by rationalising our expenditure plans and more.. Meanwhile, government should talk to the IMF to help. We shouldn’t be shy at all’, Franklin Cudjoe wrote.

The comment by the policy expert, comes on the back of similar commentaries by some individuals about the current state of the economy.

In an earlier interview on the Super Morning Show, an economist with the University of Ghana Business School (UGBS), Prof. Godfred Alufar Bokpin, warned of a possible collapse of Ghana’s economy.

According to him, as the country’s debt stock hits high distress levels, the current debt situation could get worse by the end of September, if proper interventions are not implemented.

“When you see the proportion of the debt payment, relative to the size of the revenue envelope and you look at your rising debt and you look at the rate of economic growth and the drivers of that growth, you can reasonably predict that it’s just a matter of time that the economy will just collapse. We’re probably going to run into a little bit more difficulties towards the end of September,” he said.

Last week, independent ratings agency, Fitch, downgraded Ghana’s creditworthiness from a B to a B minus, with a projected 83% debt-to-GDP for the year ending December, 2021.

This will significantly affect the country’s access to loans on the international market even as the government’s local revenue mobilization campaign is threatened, as the controversial e-levy is yet to be approved by Parliament.

Ghana’s current public debt stock stands at a staggering 341.8 billion Ghana Cedis with a corresponding debt to GDP ratio of more than 77% as of September 2021 ending. This means if the country should share this amount across the country’s 30.8 million population, everyone will owe approximately 11,000 Ghana Cedis.

In the first quarter of 2022, the government has indicated that it will borrow a total of GHS24.5 billion from the domestic market of which GHS20.7 billion will be used to service existing debt in the local market leaving the government with just GHS3.8 billion to finance other expenses.

Also, Bloomberg, in an article captioned – “Ghana Debt Moves Deeper into Distress as Investors lose Patience,” painted a gloomy picture of the economy.

Even though the Ministry of Finance refuted certain aspects of the article, there have been concerns from the public about the state of the country’s economy and the need for government to deal decisively with the lurking fiscal threats.