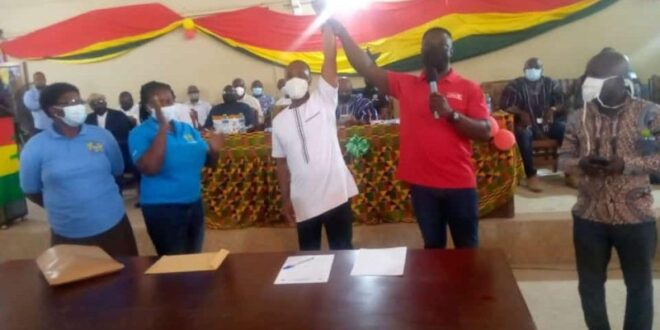 Mr Maxwell Lugudor, Municipal Chief Executive (MCE) elect for Ketu South, has called on chiefs, assembly members and opinion leaders in the Municipality to leave out partisan politics and work together for the common good of all.

He said he had come to work to realise the development aspirations of Ketu South and to help its people out of poverty and needed the support of all ‘sons and daughters of the area’ to make it happen.

Mr Lugudor who made the call shortly after receiving 86 per cent endorsement (8 “NO” votes and 49 “YES” votes) from the 57 Assembly members, said if the Municipality was going to see any real progress in development, there must be unity of purpose and no division along political party lines.

The security expert said there were pressing socio-economic issues, which could threaten the peace and security of the Municipality and that should be of worry to every well-meaning citizen of Ketu South.

He hinted at plans to meet with all the major stakeholders, including traditional leaders, the Member of Parliament (MP), past MPs as well as MCEs on the best way to develop the strategically positioned border Municipality.

“I’ll do all it takes not to let Ketu South down and I’ll need all hands on deck to fight the war against poverty in our Municipality, deal with issues of health, water and sanitation as well as infrastructure development,” Mr Lugudor said and stressed, “we’re all one people with a common destiny.”

Madam Dzifa Abla Gomashie, MP for the area, promised to support the confirmed MCE to bring development to Ketu South and appealed to the government through Mr Lugudor and Dr Archibald Yao Letsa, the Regional Minister to look at the two main issues, the continuous border closure and the tidal waves attacks threatening the livelihoods of the people, for some respite.

“I’ve enjoyed your support and all I want from you is to lend that same support to my successor. It’s about the progress of Ketu South. Let’s do it for God and country,” Mr Elliot Edem Agbenorwu, the outgone MCE encouraged the Assembly members.
GNA