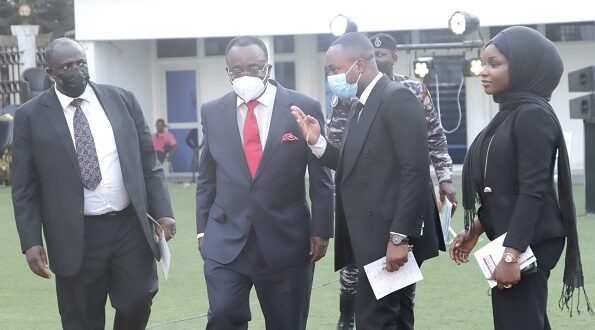 The Minister of Food and Agriculture, Dr Owusu Afriyie Akoto, has urged lawyers to make it a duty to fight injustice in society.

Dr Akoto said despite the strides made by the country, there was lot of injustice and inequalities in society which needed to be addressed.

“As trained advocates, it is incumbent upon you to continually uphold the rule of law to address the inequalities in society which Baffour Osei Akoto and others fought for,” he said.

He was speaking at the launch of the 2022 Baffour Akoto Moot Court Competition by the Students’ Representative Council (SRC) of the Ghana School of Law (GSL) at the Makola campus of the GSL last Wednesday.

The event was on the theme: “Leadership, Gender & Disabilities, Corporate Governance: The way forward after legal education”.

Dr Osei, who is the son of Baffour Osei Akoto, described his father as a foremost freedom fighter who fought injustice and political oppressions.

He said Baffour Osei Akoto formed the National Liberation Movement (NLM) to fight the one-party system that was gradually being introduced by Dr Kwame Nkrumah, and also fought against injustice meted out to cocoa farmers.

“For his role in standing up for the rights of cocoa farmers and advocating multi-party democracy, Baffour Osei Akoto and hundreds of others were detained under the Preventive Detention Act (1958) and kept in the Nsawam Medium Security Prison in solitary confinement for nearly six years,” he said.

Dr Osei advised the Law students not to forget about the vulnerable and those suffering from injustices when they finally become lawyers.

“We still have discrimination of women at the workplace and at home. Women farmers are denied land rights and in many cases their cultivation is limited to food crops rather than the more profitable cash crops. Strong advocacy of the law is therefore needed to address these concerns,” he said.

A Justice of the Court of Appeal, Justice Sir Dominic Dennis Adjei, advised the students to translate what they learn in school into leadership qualities for the benefit of society.

“You have gone through the faculty, you are now in Law school and very soon you will be called to the Bar. You must make use of the acquired knowledge in the real world. It is not about committing what you learnt to memory for academic purposes,” he added.

The SRC President of the GSL, Mr Wonder Victor Kutor, said the moot court competition would be expanded to allow participants from Law schools in other African countries.