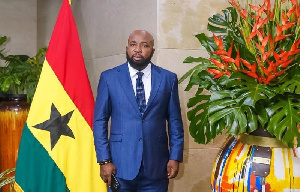 Journalist petitions US embassy over alleged deportation of presidential staffer

Larry Dogbey, publisher of The Herald newspaper has revealed that he is petitioning the United States Embassy in Accra with respect to a recent trip to the US by presidential staffer, Charles Nii Teiko Tagoe.

The Herald recently carried a story that alleged that the Mr. Tagoe had booked a KLM flight to the United States but that on arrival at the Dallas International Airport, he had been detained and deported.

The publication said the staffer, who allegedly holds a diplomatic passport, left Accra on September 13 and arrived in Dallas having gone through Schipol Airport in Amsterdam, he arrived in the US on the 14th and returned on the same day via a United Airlines flight.

It further stated that the journalist had been directed to seek clearance from the Embassy in Accra before attempting to enter the US again.

Whiles he has yet to comment on whether he returned to Ghana on the 14th, Mr. Tagoe in a Facebook post denied holding a diplomatic passport and the claim that he had been deported. He also threatened to sue the journalist over the report.

Dogbey who has since posted supposed flight itinerary of Tagoe announced via his Facebook handle on Tuesday, September 27, that he had asked his lawyers to contact the US Embassy for details of the staffer’s trip.

“We’ve instructed our lawyers to petition the American Embassy in Accra on the presence of Charles Nii Teiko Tagoe in the US on September 13 &14; nature of Visa, passport type etc. We also want to know the whereabouts of his two missing heavily-loaded bags.

“It’s unimaginable that the Presidential Staffer, a public servant paid US$10,000 for KLM’s World Business Class ticket just to eat lunch on his way to New York City and do dinner onboard Delta Airlines to Accra, on his way home hours after landing,” the post added.