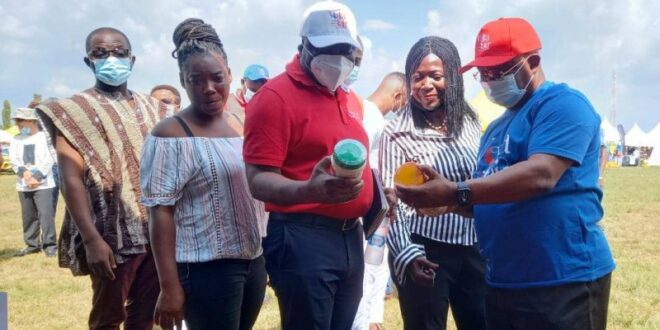 Ho, Nov 21, GNA – Mr Ken Ofori-Atta, the Finance Minister, has revealed that interventions in the Volta Region such as the Trade and Investment Fair, are critical in promoting entrepreneurship.

He said the interventions would offer opportunities to people who would require some support.

Mr Ofori-Atta said this when he visited the Ho Sports Stadium; for the Fifth Volta Trade and Investment Fair with his spouse Dr Angela Ofori-Atta at Ho for a Budget Retreat for Members of Parliament.
Mr Ofori-Attah said he was elated by the interventions the Regional Minister and his team were putting in place to bring the world to the Region and government came in as a form of support, allocating 10 billion, which would provide cheaper financing, longterm access to financing, training in the ICT digitisation environment for the youth.
Mr Ofori-Atta said the government’s focus was how jobs were created for the youth with trade fair, tourism and entrepreneurship.
He noted that the 2022 budget was intentional about building a sustainable entrepreneurial nation through fiscal consolidation and job creation which fitted in their mantra of what Ghana should become.
Mr Ofori-Atta said the population of the youth had increased from over two million in the 1960s to over 10 million in the new census.
He said the challenge was to make sure the youth were able to get jobs either by creating it themselves through entrepreneurship or private sector sponsoring.
He said it was the first time in history that a budget of a package of GH¢10 billion was put together to tackle problems of the youths, roads and debts.
Mr Ofori-Atta noted that he believed the government was on the correct path and thought the youth would stand behind “this historic intervention” to get the e-levy passed.
He said the e-levy was a “burden-sharing.”
“Talk to your parliamentarians and let them know that this is for you so they should change the mantra to talk for jobs.”
He said the dignity of not working was something which should be taken away and it was the State’s responsibility in a sense to reduce the risk and encourage entrepreneurship.
He told the exhibitors at the Fair that there was hope in the budget and could resolve problems in the future.
Dr Archibald Yao Letsa, Volta Regional Minister, noted that there was the need for the e-levy to be passed because its targets were youth unemployment problems, issues of road networks and debts to be paid.
He said there must be support for the government to share the burden to ensure the success of the nation.
Source: www.gna.org.gh
2021-11-21
fafaafmonline_editor