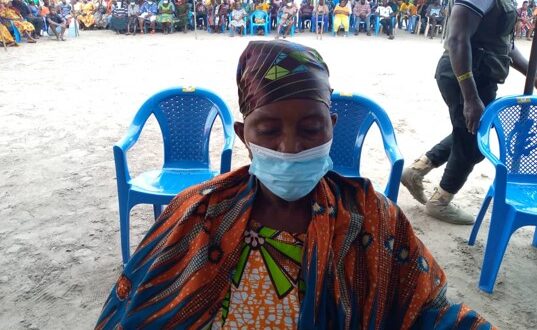 Gakpokorpe community of the Akatsi South District of the Volta Region of the Republic of Ghana has been entangled in the web of wizardry attacks for the past 25 years more or less. According Mr. Philip Gakpo, in a petition dated 11th March, 2019 and directed to the Executive President of the Duamenefa Foundation, Mr. Emmanuel Ketaman Evortepe, for urgent investigation and intervention, he alleged that their father owned a mysterious wizardry pot which he used to support his farming and business activities while he was alive.

The wizard which does manifest in the form of a creature has succeeded in wreaking havoc on the members of the Gakpo family at home and abroad during the life time of their father. The siblings of their father used to plead for him to free the family from the hands of this strange wizardry phenomenon, but their father was adamant until his untimely demise.

Mr. Philip Gakpo is now accusing two of his siblings, Agbotadua Amegavi Gakpo and Masaga Gakpo, as the people who took custody of this strange wizardry pot after the demise of their father. According to him, the two siblings are manipulating this wizardry spirit to their advantage and to the detriment of other members of the family.

Strange occurrences such as untimely deaths of members of the family are rampant. Togbi Agbedor, the Divisional Chief of Gakpokorpe Community, when interviewed by the Duamenefa Foundation of Fafaa FM, claimed that FIVE (5) of his children died simultaneously and in very mysterious circumstances as a result of the manipulation of the wizardry spirit. According to the Divisional Chief, his remaining two children are also rendered imbecile by this spirit. He called on the Duamenefa Foundation of Fafaa FM to facilitate its intervention mechanism to rescue his community from the hands of this power of darkness.

Georgina Gakpo, a practicing nurse and member of the family had a dream that she was bitten by a strange snake, awoke to find her leg was swollen. She tried to seek medical solutions from one hospital to the other until her untimely death recently.

Angela, also a member of the family claimed on Fafaa FM during an on-air interview that she suffered terrible trauma in the hands of this wicked spirit. According to her, the wizardry spirit visits her in the form of a wild creature, very black in complexion and over 12 feet tall; she claimed that anytime the creature enters her room in the middle of the night, the lights would turn off automatically and the wizard would forcefully have sexual intercourse with her. She further states that the sperm of the wizard is always found in her private parts after the intercourse.

This development has driven away all suitors who want her hand in marriage. She is still single and above 30 years. She pleaded with the Duamenefa Foundation of Fafaa FM to investigate this matter and unravel the mysteries behind this unnatural phenomenon.

Patience, another member of the family also alleges during the investigation that she is above 40 years and unable to marry due to the physical and spiritual involvement with the wizardry spirits. She also lamented bitterly and called on the Duamenefa Foundation of Fafaa FM to hasten up with the investigation and intervention because other members of the family were allegedly sick as a result of spiritual attack by the wizardry pot.

The Assembly man of the community, Hon. Justice Goka, also claimed that he has succeeded in contracting an electrification project for 18 communities of the Akatsi South District, among them is the Gakpokorpe community. Seventeen (17) out of the 18 communities were connected to the National grid except Gakpokorpe. He stated that the Chinese contractor was forced to flee with his workers when he encountered the strange wizardry spirit in his sleep. The Chinese contractor told him, the wizardry spirits interfere with their operations and warned him not to connect light to the community because he, the wizard is a spirit of light governing the territory. The contractor abandoned the project and fled with his workers.

In another development, Agbotadua Amegavi Gakpo and Masaga Gakpo, the two siblings who have been accused of possessing the spirit also petitioned the Duamenefa Foundation to investigate the allegations being levelled against them. They claimed that they do not know anything about the accusations and they further alleged in their petition that they were exonerated during a “trial” many years ago, but their senior brother Philip denied their claim.

After series of interrogations with the relevant lawful agencies such as the directorate of the national commission for Civic Education of Akatsi South led by the District Director Rev. Vincent Adika, the Former Director of the NCCE, Mr. Francis Gota , traditional rulers of Akatsi, Live, Gakpokorpe and its environs, it was agreed that a customary traditional arbitration should take place to allow the traditional rulers use their customary methodologies to unravel the mysteries behind this alleged unforeseen circumstances beyond control.

A traditional arbitration was summoned and held under the chairmanship of Togbi Adzadzi II, of Live, Akatsi, other traditional rulers such as Togbi Zormelo II, Togbi Dahume II, Togbi Agbedor, Zikpitor Gadri, Regent Totri, Dumega Ede among others were present.

See also story: ONGOING INTERVENTION TO RESCUE THE COMMUNITY OF GAKPOKORPE IN THE AKATSI SOUTH DISTRICT OVER ALLEGATIONS OF WIZARDRY ATTACKS – Duamenefa Foundation

The Ghana Police Service Akatsi, The Commission for Human Right and Administrative Justice, The National Commission for Civic Education, Akatsi and Mr. Francis Gota, former director of the NCCE, Ketu were invited in line with education on the provisions of the constitution and the public order act.

The arbitration started well with both parties trading accusations and counter accusations against each other, but it was confirmed by an elderly family member to the traditional jurist that the spirit exists and it is with the family, the elderly man encouraged the traditional rulers to further their probe through traditional sorcery to mitigate the hazards being inflicted on members of the community.

The arbitration was postponed to Thursday the 29th day of July 2021 for continuity. The chiefs believed that their method of traditional divination would unravel the mysteries surrounding the whereabouts of the strange mysterious wizardry pot.

Watch out for the outcome……..