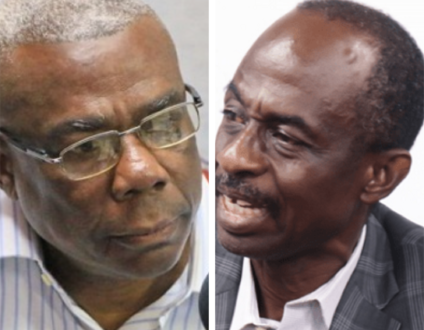 Former National Chairman of the New Patriotic Party (NPP), Peter Mac Manu and General Secretary of the National Democratic Congress (NDC), Johnson Asiedu Nketia, have concurred with the outcome of a Centre for Democratic Development Ghana (CDD) study that regarding illicit funding of political parties.

According to Mac Manu and Asiedu Nketia, this phenomenon has adversely affected Ghana’s fight against corruption.

“In every passing election, the system becomes more monetized. That is why I am scared that unless we as a country find a way of pulling the breaks, our democracy will be heading towards doom,” Mr Nketia said.

Speaking on JoyNews‘ Newsfile on Saturday, the former NPP Chairman also disclosed that some MPs are indebted to their financiers.

“If they don’t find contracts, or corrupt means to pay them back, they are not going to be steady working in Parliament. They will be sitting in Parliament but their minds will be elsewhere,” he added.

In view of these challenges, the two representatives of the main political parties in the country, while interacting with host, Samson Lardy Anyenini, made suggestions to address the issue.

Mr Mac Manu called for a definite period for campaign by political parties and their candidates. He revealed that unlike Ghana, some African countries such as Nigeria and Kenya have prescribed duration for campaign.

He explained that due to the free range, campaigns in Ghana can last for about a year.

“The length of our campaign periods must be shortened and it must be decisive, two or three months is the campaign period. Because in our country, we don’t have any laws on campaigning periods and people campaign throughout the year but in other African countries, Kenya and Nigeria, it is three or two months.”

“So we must change the law to define the time frame for the elections,” he therefore advised.

Also, Mr Manu suggested that there must be a reform on the filing of political parties post-election expenditure and accounts.

“We should widen it and make it transparent and public and name people who contributed to a candidate and a party. It should not be limited to the party alone. So that at the end of the day, we know where the monies are coming from and what they were used for,” he said.

Mr. Asiedu Nketia, added that such reforms must be extended to candidates who contest for political offices.

He pointed out that candidates must be compelled to provide such information because the majority of funds used by candidates do not pass through the accounts of their political parties.

“The bulk of the funding is done directly by the candidate to whom they choose without passing the funding through the accounts of the political party. So sitting at headquarters in Accra, I’m not in a position to know how much the NDC candidate in Kwesimintim for instance is spending in his campaign and what he is spending the money on. It is the same for presidential campaign.