Breaking News
Home / NEWS / If you dare me again, you will die! – Anyidoho issues divine decree to detractors 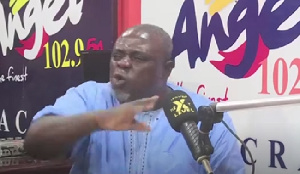 If you dare me again, you will die! – Anyidoho issues divine decree to detractors

Founder and head of the Atta Mills Institute, Samuel Koku Anyidoho has cautioned all his detractors that they risk death if they continue to disturb his peace.

He cited his divine connections and closeness to God as a basis for his caution stating during that he had had enough of people seeking to deliberately run him down for no good reasons.

He cited GhanaWeb and told Kofi Adoma of Accra-based Angel FM on the February 2, 2022 edition of the morning show that the other detractors know themselves.

“Like I’ve said today, I have read the words of Isaiah 61, and I am sending a warning to everyone including GhanaWeb… I am not an angel (yes) I have angels around me, so I am susceptible to mistakes.

“But when you deliberately run a man own because you have been paid to do it, I swear! Anybody should do it again in this country, you will die! Because enough is enough. Enough is enough,” he charged.

“Enough is enough, you will die. You don’t know who I am, you don’t know the altars I pray on, so don’t dare me again… I pray and God listens to me. So I am issuing a decree today, if anybody dares me again… stay in your lane. If you don’t like me, I don’t like you either,” he added.

Anyidoho appeared on the show to talk about his time working as spokesperson of former President John Evans Atta Mills.

He also responded to questions around a new institution founded to preserve the legacy of the former President, the John Evans Atta Mills Memorial Heritage – it is under the auspices of former president John Mahama and is led by former deputy Chief of Staff Alex Segbefia.

Whiles Anyidoho is clear that he has no issues with the new project that was launched earlier this week, he has slammed them for among other things ‘stealing’ the green and white colours he had adopted for his Institute.