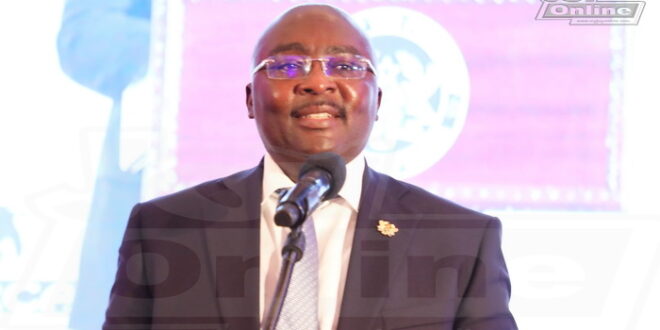 I will choose Ghana Card over 1,000 road interchanges – Bawumia

The Vice President, Dr. Mahamudu Bawumia, has declared his choice for the Ghana card over road interchanges in the country’s quest for development.

According to the Chairman of the Economic Management Team, the national identity card, also known as Ghana Card, is more beneficial than the numerous interchanges constructed across he country.

“We have implemented a national identification system and today we have 16 million Ghanaians with unique identities and that is a major transformation. And sometimes a lot of people don’t even appreciate what the impact of the Ghana Card is.

“But if you gave me 1,000 interchanges and a Ghana Card, I will choose the Ghana Card because it is more impactful,” he said on Thursday.

Touting the benefits of the Ghana Card, Dr Bawumia said the single act has simplified the implementation of digitisation and has assisted government in its fight to curb corruption.

Ghana Card registration was re-launched by the Akufo-Addo administration on Friday, September 15, 2017.

Government sought to make the card serve as a unique identifier for both resident and non-resident Ghanaians as well permanently resident foreign nationals.

Since its implementation, many have argued that it would eventually be a great asset for the national planning and development of this country.

Fast forward, the card has been linked to some critical economic and social sectors of the country.

Currently, the card serves as an electronic passport and SSNIT card.

The Bank of Ghana also announced that effective July, the Ghana Card will be the only approved card for all bank transactions in the country.

Also, the National Communication Authority (NCA) has asked citizens to re-register their SIM Cards with their Ghana Cards.

Also, the Electoral Commission (EC) has requested to compile a new voters register with the Ghana Card for the 2024 general election.