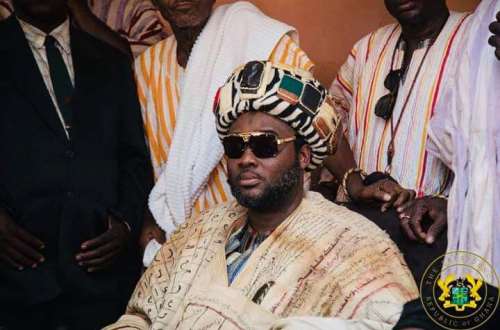 Dagbon has been plunged into mourning following the announcement of the untimely death of the heir apparent to the Dagbon Skin, the Mion-Lana, Naa Abdulai III.

He was the next in line after Yaa Naa Abukari Mahama II based on the rotational system of the Dagbon kingship.

Known in private life as Mahamadu Abdulai, the late Mion Lana was born in 1974.

As a member of the Abudu gate, the late Mion Lana was also the Regent of Dagbon, a position he held until his death on Wednesday at the Korle-Bu teaching hospital after a short illness.

JoyNews Latif Iddris gained exclusive access to the Airforce base and reported that the mortal remains of the 48-year old was airlifted to Yendi earlier in the day.

The Mion-lana, or Naa Abdulai III, was a dynamic traditional ruler who was often described in some circles as “The Peace Maker” of Dagbon, following his momentous role in the Dagbon peace process.

As the then Bolin-Lana; a title bestowed on a Zuu (first son of a late king before internment), otherwise referred to as the Regent of the late King and Overlord of Dagbon (His Majesty Naa Mahamadu IV, 1969 – 1974), he was the only person qualified to ascend the throne of Dagbon as Ordered by the Supreme Court of Ghana in 1986.

The ruling was to the effect that the two royal families of Abudu and Andani must ascend the Yeni Nam (Yendi skin) in turns after a vacancy occurs. That is, rotation between the two royal gates must be scrupulously observed. When the funerals of the two late kings were performed, there were expectations from the Abudu Royal Family that Bolin-lana will be enskinned as the Ya Na (King of Dagbon), because he was the only qualified candidate in tandem with the letter and spirit of the Supreme Court Orders.

That is to say, the then Kampakuya Na Abdulai (now Yoo Naa of Savelugu) and then Yoo Naa Abukari (now the Ya Naa) were not qualified to ascend the throne in light of both of them being from the Andani gate. When word reached the Bolin-Lana that then Yoo Naa Abukari (chief of Savelugu) had been given cola nut (i.e. nominated) as next occupant of the throne of Dagbon, tension which was already high was worsened to levels of explosion and to make nonsense of gains made thus far in restoring peace in Dagbon.

It was a word of congratulation from Bolin-Lana, “The Peace Maker” on the media airwaves that saved the Dagbon kingdom from descending into another round of chaos.