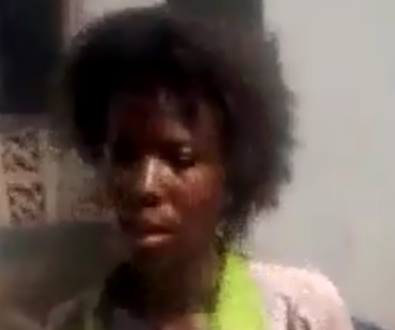 Miss Kokoroko is suffering from allegations of mental ill health resulting from her encounter with a young man by the name Richmond Klevor.  According to Mr. Gideon Kokoroko, the father of the young lady, in a petition to Mr. Emmanuel Ketaman Evortepe, the Executive President of the Duamenefa Foundation of Fafaa FM Dzodze, dated 21st day of May, 2021, Mr. Kokoroko alleged that her daughter was charmed through the wiping of her face by Mr. Richmond Klevor.

Mr. Kokoroko further claimed that his daughter was in her basic school when Richmond attempted luring her to sexual relationships, but his daughter refused to oblige. Richmond therefore deployed spiritual means of incantations to wipe her face and her daughter dropped out of school to become pregnant for Richmond who did not perform marital rites as tradition demands. Even though the family resisted the relationship, Richmond through his spiritual manipulations succeeded in impregnating her for the second time, thereafter their daughter began to suffer intermittent mental disorders.

She would behave abnormally by shouting and screaming loud throughout the period of attack. She would keep calling the name of Richmond to free her from spiritual incarceration and other loose talks.

The family summoned Richmond before the traditional arbitration court of Hon. Togbi Adzei III, the Divisional Chief of Atiteti Traditional Area. The Chiefs and elders referred the family to Pantang Psychiatric Hospital for medical examinations to enable the traditional arbitration to court verify if the mental condition of Miss Kokoroko is physical or spiritual. The medical report proved negative suggesting that it’s purely a spiritual attack.

Richmond was therefore summoned to answer why he chose to manipulate the charm against the innocent woman. He admitted to the aforementioned charges levelled against him and pleaded to be given an opportunity to exorcise his charms and free the woman, but he disappeared from the community after the traditional arbitration; hence the need to petition the Duamenefa Foundation of Fafaa FM for investigation and intervention to free their daughter from the spiritual incarceration.

The Duamenefa Foundation of Fafaa FM deployed its undercover investigation team for an immediate investigation and intervention. All parties involved were thereafter subjected to on-air interrogations to unravel the mysteries surrounding the intermittent mental disorder of Miss Kokoroko.

The timely intervention of the Duamenefa Foundation of Fafaa FM necessitated the return of Mr. Richmond Klevor, who claimed he relocated to Accra for job issues, for an amicable resolution of the aforementioned allegations being leveled against him.

It was reported by Togbi Adzei III that the timely intervention of the Duamenefa Foundation of Fafaa FM, during its social intervention program on Sunday the 1st day of August 2021, has yielded a positive result as Richmond returned from his hideout to Atiteti on Wednesday the 4th day of August 2021 for the continuity of the processes towards the freedom of the young Miss Kokoroko.

The Duamenefa Foundation of Fafaa FM is a Non-profit organization made up of over 16,135 certified and registered volunteers (still registering members) whose mandate is to collaborate with lawful agencies to investigate and intervene to liberate the vulnerable whose human right are been trampled upon as results of manipulation and orchestration of demonic and spiritual matters and to promote peaceful coexistence.

Watch out for further development on this story…