Breaking News
Home / NEWS / Guinea Coup: There could be two more coups by December in the sub-region – Prof. Aning 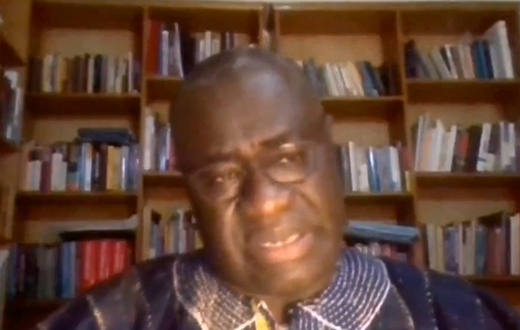 Guinea Coup: There could be two more coups by December in the sub-region – Prof. Aning

The Director of Faculty of Academic Affairs and Research at the Kofi Annan International Peacekeeping Training Centre (KAIPTC) is predicting two more coup d’etats in the African continent if measures are not put in place by international communities to address the military takeover in Guinea.

Prof Kwesi Aning, speaking on PM Express on Monday, explained that the Economic Community of West African States (ECOWAS) and the African Union (AU) have failed to ensure its member states adhere to laid down conventions as well as reprimand those who flout them.

Thus, he told host, Evans Mensah that it would come as no surprise if two more takeovers occur before the end of the year.

“What has happened in Guinea is painful. It is something that could have been prevented. It is unnecessary, however not surprising that it has taken place. What we are witnessing is a failure of leadership across our continent.

“If we don’t step in and crack the whip and ensure that member states indeed comply with what they have signed on to, by December, you and I would be having this conversation with respect to two more coup d’etats,” he said.

His comments come at a time when the African continent within a year alone has witnessed three coups and an attempted takeover.

Mali has witnessed two coups, Guinea’s administration was recently taken over by the military and there has been an attempted coup d’etat in Niger.

According to Ranking Member on Parliament’s Foreign Affairs Committee, Samuel Okudzeto Ablakwa, these happenings show that “the AU, and ECOWAS have just become a club where you can do whatever you want”

The North Tongu MP who also believes the international community has failed in its mandate is pushing for a peer review mechanism where African leaders sit and speak to one another truthfully on the instability happening on the continent.

On Sunday, September 5, a Guinean military officer, Mamady Doumbouya announced that the country’s constitution has been revoked following a coup.

After seizing the airwaves, the mutinous soldiers vowed to restore democracy.

Meanwhile, according to two Guineans who spoke under anonymity on JoyNews’ PM Express, citizens are celebrating the overthrow of President Alpha Conde, who sources say has been detained.

This they said is because “the just-dissolved government had ruled with some kind of maximum operation and this has been the case since 2010. Arbitrary arrest actions and injustice and a whole lot of it you can mention when it comes to misgovernance, corruption.”

“We will consider it as a kind of justice rendered to the entire country because these people have long been oppressing the Guineans so seeing them out of the way is a kind of joy. It is satisfaction that people are expressing through the videos you are seeing online. So this is the situation. We feel like we have just been freed from an oppressive government,” they added.

Also, the Economic Community of West African State (ECOWAS), has condemned the Guinean military’s arrest of Alpha Conde, and is demanding his release and immediate return to constitutional rule.