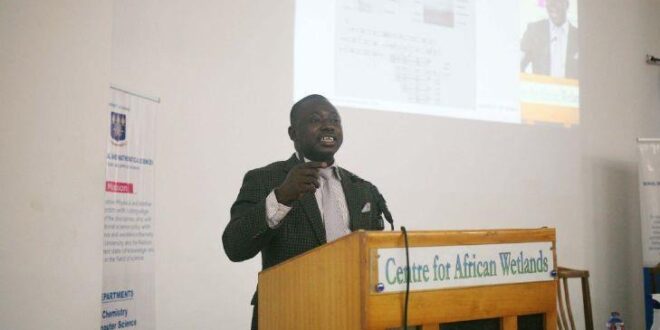 A breakthrough research in drug composition for a more effective treatment of HIV has been made.

The research which was done within six years found new targets in the HIV virus that drugs can be developed in the treatment of the disease.

The research was undertaken by a Senior Lecturer at the Department of Chemistry of the University of Ghana (UG), Legon, Dr Jerry Joe Harrison.

According to him, drugs targets specific proteins in the virus “and this is one that we never knew, and now that we know we can use it to develop more effective drugs against HIV”.

In an interview with the Daily Graphic after a public engagement on the topic “Chasing an enigma: Unmasking the mystery on HIV polyproteins for potential drug development” organised by the School of Physical and Mathematical Sciences of the UofG, Dr Harrison said the new research found new targets that drug specific proteins could be developed for the HIV virus.

Hitherto, according to Dr Harrison this drug target that had been found was not known but with the new research, which was done in the United States of America (USA), drugs can be produced to specifically target the virus in the human body.

He said anybody could access the information on the new drug composition including people in the drug development field, pharmaceutical companies who are interested in developing HIV drugs and individuals who want to explore and understand how the viurs reproduces itself, at no cost.

Most of the experimental work of the research which he said was sponsored by the National Institute of Health, USA was done in the USA and finalised in Ghana.

He said the current research has been able to go into the intimate molecular level to determine the structure of one of the stages through which the replication of the HIV virus goes.

This he said helps to deliberately design a compound that would go and interfere specifically with that particular stage and stop it.

However, he said this method has its advantages and disadvantages as the HIV virus had the potential of changing as and when it is attacked, it also try to avoid destruction.

However, he said if one is able to target as many enzemes as possible and destroy them instead of the general screening of drugs to find out which one inhibites which enzeme.

He said the current research was an import part of a huge ‘zigsaw’ that needs to be fixed explaining that the research would further help in designing more effective methods for the treament of HIV.

A Professor at the University of Ghana’s Nutrition and Food Science Department, Matilda Steiner-Asiedu who represented the Provost of College of Basic and Applied Sciences, UG, Professor Boateng Onwona‐Agyeman, called on the students present to apply what they learn at the university to solve life issues.

She commended Dr harrison for thinking outside the box during his research to be able to come out with the results and called on all to employ team work in whatever they do.

Dr Mary Anti Chama, Head of Department of Chemistry who represented the Dean of the School of Physical and Mathematical Sciences, Prof. Sandow Mark Yidana, said the discovery has given a new insight into the biology of the HIV cells.

She commended Dr Harrison for the cutting edge research and called for support to develop it further and called on institutions to help develop funding for students research.