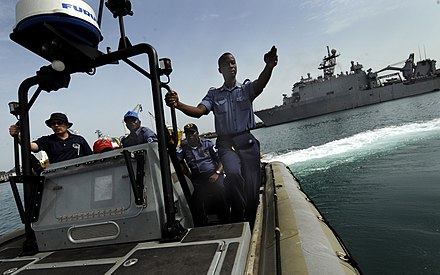 The operation which took place at about 2am, ended without any casualty to the vessel and its crew. The vessel continues to be engaged in its lawful fishing activities, according to the Ghana Armed Forces.

A statement signed by the Acting Director, Public Relations, Commander Andy La-Anyane said the Navy in recent times has doubled its patrols at sea to curb the numerous piracy attacks in the Gulf of Guinea making our Exclusive Economic Zone one of the safest in the region.

Piracy threat
The piracy situation in the Gulf of Guinea has created a sense of insecurity in the West African sub region.

One Korean, a Russian, and three Chinese nationals were among the abductees.

In September 2020, the Ghana Navy and Air Force also foiled an attempted pirate attack on an oil tanker off the coast of Takoradi.

The oil tanker, MT Hafnia Phoenix escaped the pirate attack some 72 nautical miles off the coast of Takoradi last Tuesday after undertaking a manoeuvre to outwit an armed gang of pirates.

Also, in June and August 2020, two separate incidents occurred with two Koreans abducted and held captive in the Niger Delta.

The Korean Embassy in Ghana negotiated for their release.

The pirates often demand ransom not less than $50,000 with kidnapping now an attractive cooperative venture for pirates.

Cooperation to fight threat
Commander La-Ayane said in Ghana, the Navy has strived to maintain adequate security at sea to enable a conducive maritime environment for national development.

As part of efforts to deal with the threat, the Chief of the Naval Staff, Rear Admiral Issah Yakubu has held discussions with his counterparts in Nigeria, Benin and Togo, on how to deal with the menace.

Rear Admiral Yakubu has visited these neighbouring countries to seek their cooperation to combat the threat.

Also, the Ghana Navy in its quest to curb the menace, has deployed armed naval personnel onboard fishing vessels in consultation with stakeholders in the industry.