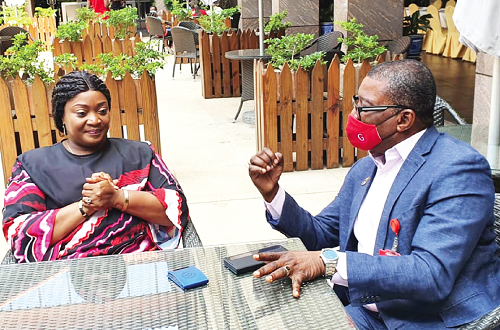 From First Lady to Vice-President ; Face to face with Liberia’s Jewel Taylor

The Vice-President of Liberia, Her Excellency Mrs Jewel Howard Taylor, was in Ghana to pay her last respects to Lieutenant General Joshua Hamidu, former Chief of Defence Staff, who was a family friend and very close to her former husband, former Liberian President Charles Taylor, and was very instrumental in bringing peace to Liberia during those turbulent years.

The Editor of the Daily Graphic, Mr Kobby Asmah, caught up with Mrs Taylor after the burial and she granted this exclusive interview on a wide range of issues bordering on her life, relationships, politics, governance, and the economy. Below are excerpts.

Kobby Asmah: Your Excellency I want to welcome you to Ghana once again. What informed your visit this time round?

Jewel Howard Taylor (JHT): Thank You for your warm welcome Editor but as you are aware, Ghana has been home for many Liberians and I used to visit once a while. But as you said, my visit this time was to attend the funeral of a family friend.
When I heard about his passing I decided to come and pay my last respects. He was a close friend of Charles Taylor. I also want to use this opportunity to thank Ghanaian leaders and regional leaders who intervened in Liberia during the crisis in order to bring peace to the country.

Kobby Asmah: Talking about peace in Liberia, so how is your country sustaining this peace?

Jewel Howard Taylor: As you know peace is a sine qua non for everything and luckily we have had this peace cemented with the election of Ellen Johnson Sirleaf as the President and for years we managed to put in place structures and laws to ensure that we will not derail from the peace. Once you have peace all other things are possible.

Currently 60 per cent of our population are the youth who are mostly war babies and we pray that what happened will not recur. We have all come to the realisation that people will no longer be taking power by force.
The struggle has always been about power but the ballot box should be the decider, to give power and to transfer power democratically.

Kobby Asmah: From a First Lady to Vice-President of Liberia. How did it all happen?

Jewel Howard Taylor: I will take it first as a woman because women were relegated to the back. We are the nurses, teachers, secretaries and housewives but that has to change now and women ought to know what they are born to be; you need to know what you are cut out for.
I was into banking but I remember in 1981 everything was in chaos in the country and before I entered the university I didnt know what to read so my father called me and said: “You’re going to the university now but you may not do political science”.

Many years later, here I am when I was warned by my father that politics is not for women. Getting into politics was not easy because when I expressed the interest, the backlash was too much: “ Wife of Charles Taylor go and sit somewhere”, among others, but I was not deterred I persisted and luckily a law was passed to allow 30 per cent of women to run in the elections due to gender equity.