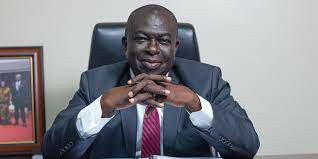 Former Roads Minister, Kwabena Owusu Aduomi, is under fire for openly confessing payment of about 3million Ghana Cedis as an enticement fee during the 2020 NPP parliamentary primaries.

In an interview with local television, Mr Aduomi revealed he paid 5000 cedis to each of the 600 delegates to entice them to endorse his candidature and vote for him.

But despite paying that huge sum of money, he lost his seat in the elections to his strongest opponent – Lawyer John Kumah.

Mr. Aduomi who looked unhappy recounting his losses, added that politics is for the brave-hearted.

But these comments have been received with utter disgust by many on social media questioning the rationale behind the revelation.

A call for action

In his Facebook post, he questioned why the open confession has not attracted the interest of the law enforcement agencies.

“A former primary candidate has confessed that he paid ₵5,000 to each of the 600 delegates in the most recent NPP primary. That is, ₵3M or approximately $500k just in “enticement fee” (e-fee).

That the confession does not come as a surprise or attract the interest of law enforcement shows the extent to which we have allowed money to ‘comorosify’ our politics.”

He continued that, “…we can blame the Constitution, prophesy, Milo, etc. for our woes but the reality is that our problems start with the corruption of our politics.”

It is an undeniable fact the NPP leadership in its strongest region-Ashanti Region-has come under strong criticism in recent years with Chairman Wuntumi at the helm of affairs.

The next person to take up the mantle has a lot to show for in the exhibition of strong qualities that will show admirable leadership.

Kwaku Owusu Aduomi has declared interest in the seat.

But Mr Aduomi’s leadership qualities have come under fierce scrutiny in an interview where he indicated he cannot defend popular comments made by the then-candidate Nana Akufo-Addo to the effect that the country was sitting on wealth yet its citizens were hungry.

“I am an Engineer and not an Economist”, was his explanation continuing that he did not make those comments so cannot defend them.

There has been public condemnation on his posture to dissociate himself from the statement by his boss raising questions about his leadership.

Perhaps, he does not subscribe to the politics that demands that every party person must defend along party lines.

His latest confession of involving in what is being described as bribery and corruption could taint his image and affect his chances.

Law Professor, Mr Azar for instance, emphatically mentions that such persons cannot be trusted with power.

“We cannot expect politicians who pay e-fees to govern with accountability, probity, and transparency.

As the good book reminds us, those who come to power through ‘comorosification’ will surely ‘comorosify’ the national treasury.”

For him, a reform is imminent to get rid of the seeming corrupt practices by leadership.

“GOGO will do political party reform on day 3 to rid primaries and general elections of e-fees. Both payers and receivers of e-fees will spend years in Nsawam and be banned from politics. #SALL is the cardinal sin of the 8th Parliament.”