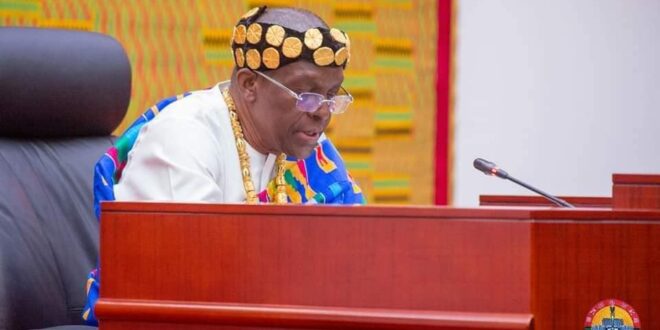 The Office of the Speaker of Parliament has described as mischievous, intriguing and an exaggeration, publications in new and traditional media focusing on the travel of Speaker Alban Bagbin to Dubai for medical review.

According to the Speaker’s Office in a statement it issued on Monday, March 7, contrary to claims in the publications, the Speaker did not travel to Dubai with his children and “has never included his children in any of his trips.”

It says “Travel expenses for Mr. Speaker’s trip to Dubai is in accordance with what is prescribed for the Speaker of Parliament long before Rt. Hon Bagbin became Speaker, and also for analogous members of government such as the President, Vice President and the Chief Justice.

“The figures quoted in the story as per diem are false. The Speaker has no hand in the computation of his per diem and it is available as part of the official records of the State. It is part of the mischief that the publication is aimed at.

“For purposes of clarity, Mr. Speaker traveled with the medical doctor in charge of Parliament Medical Centre, his spouse as carer and two other officials of Parliament as the least in practice. There is no advance party, no children, and certainly no other member on his entourage.

“What is intriguing is the focus on Mr. Speaker’s travel and the efforts at exaggerating the cost. Meanwhile, there is complete silence on the travels of other members of government, the frequency of which is far higher than that of Mr. Speaker.

“Even within the hierarchy of Parliament, there are members of the leadership whose frequency of travel is far higher than that of Mr. Speaker. It is also on record that Rt. Hon. Bagbin, in his 14 months as Speaker, is the least travelled of all previous Speakers of Parliament within the same time frame.