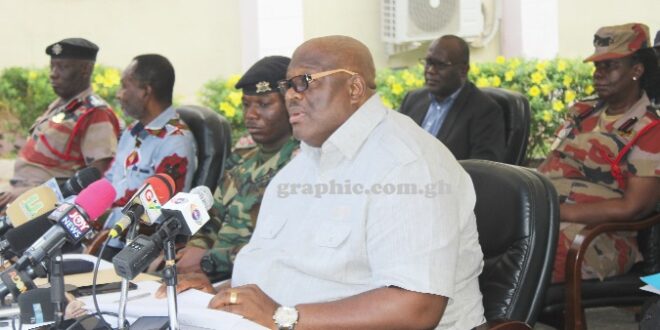 Encroachment on CSIR lands: Developers given 48 hours to vacate

Encroachers on lands belonging to the Animal Research Institute (ARI) of the Council for Scientific and Industrial Research (CSIR) have been given a 48-hour notice to move out of the area or face ejection.

After the deadline, the Greater Accra Regional Security Council (REGSEC), in collaboration with the Adentan Municipal Assembly and the CSIR, will move in with full force to remove all unauthorised structures mushrooming within the 200-acre fenced land.

Any persons found loitering on the land will also be dealt with in accordance with the law.

“REGSEC is hereby giving a 48-hour notice from now to all those who are putting up such unauthorised structures within the fenced wall to pack their tools and materials from the land without fail.

“We will move in and do what is needful for God and country without fear or favour, and I must say that I do not want anybody to call me. What is right is right and what is wrong is wrong,” the minister stated.

The government, under Executive Instrument (E.I. 38), established the CSIR-ARI on a land measuring over 1,000 acres at Adentan-Frafraha in 1976, with a mandate to conduct research into the development and transfer of livestock and poultry technologies to communities, farmer groups, private and public organisations.

That was to ensure the long-term food security of the nation.

When the land was acquired by the government, all owners, including the original owners at Berekuso in the Akuapem South District, were compensated.

However, over the years, some unscrupulous persons have made it a habit of selling portions of the land.

In 2014, as part of efforts to retrieve the encroached lands, the CSIR-ARI went to court and obtained a Writ of Possession in an attempt to evict encroachers from the land, but the exercise failed to materialise.

In an attempt to stop further encroachment, the institute, in 2017, acquired a loan to fence off the remaining 200-acre portion of the land, but currently, large portions of the fence have been broken down by encroachers.

Already, Mr Quartey said, members of the REGSEC had visited the site and seen the aggressive encroachment.

He said large portions of the fence had been broken down by encroachers, who had moved in to put up structures and fence walls to demarcate plots for themselves.

The minister indicated that land guards had broken down portions of the piggery infrastructure, destroyed four cattle kraals and replaced them with building foundation.

Furthermore, he said, they had built walls and single rooms in front of the hatchery, meat processing house and the Dairy Processing Unit, thereby blocking access to those facilities by vehicles.

Besides, he said, some ongoing experiments, some of which were sponsored by donors, had been destroyed by the land guards.

“The government recognised the clash between local farmers and herdsmen as a threat to national security and, therefore, placed the National Cattle Ranching Committee under the Ministry of National Security,” Mr Quartey said.

“To address this herdsmen problem, the Cattle Ranching Committee is developing a grazing corridor from the north to the south of Ghana and the CSIR-ARI is to provide expertise and locally developed nutritious pasture planting materials for the project. All the pasture materials developed for this project have been destroyed by land guards with bulldozers,” he added.

He said the armed land guards walked in and out of the institute with impunity, with some riding motorbikes and compromising the bio-security of the farm animals.

The current situation, the minister said, therefore, called for drastic measures to deal with the impunity with which people had encroached on the land to protect it.

What the law says

Section 121 of the Land Use and Spatial Planning Act, 2016 (Act 925) states: “An authorised officer may, without notice, effect or carry out instant prohibition, abatement, alteration, removal or demolition of an unauthorised development if that breach is creating an environmental nuisance, as defined in an enactment relating to the environment or interferes with the use of public right of space.”

Also, Section 97 of the Local Governance Act, 2016 (Act 936), which deals with enforcement against unauthorised development in respect of community right of space, states: “A District Planning Authority may affect or carry out an instant prohibition, abatement, alteration, removal or demolition of any unauthorised development carried out or being carried out that encroaches or will encroach on community right of space or that interferes or may interfere with the use of the space.”

“The action to stop the encroachment on the community right of space shall be without prior notice.”

Making references to the laws, the regional minister said confirmation from the Adentan Municipal Assembly indicated that none of the buildings had been issued a permit.

Based on that, he indicated that the assembly had the power to remove the structures that were mushrooming on the land without prior warning.

However, Mr Quartey said, the assembly, as well as the ARI, had gone ahead to issue warnings to developers within the perimeter to stop any development, “but the warnings have been largely ignored by these encroachers with impunity”.