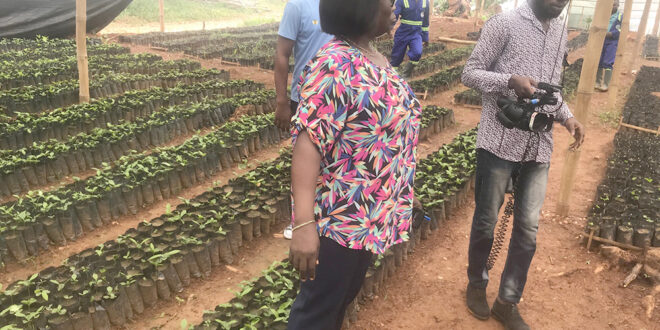 In a bid to increase annual coffee production in the medium-term, the Ghana Cocoa Board (COCOBOD), through its Seed Production Division (SPD), intends to distribute 630,000 free coffee seeds to farmers across the country.

Currently, Ghana produces about 10,000 tonnes of coffee annually for the domestic market and the programme is aimed at scaling up to 50,000 tonnes.

The move has become necessary due to the growing demand for coffee locally and globally.

The development of the coffee industry is part of COCOBOD’s mandate and over the years, the board has been doing this alongside cocoa.

However, due to the lack of demand for the commodity and unfavourable prices, farmers lost interest in its production, which also led to COCOBOD slowing down its support to the sector.

But with demand bouncing back, and the need to diversify the country’s economy from its dependence on cocoa, COCOBOD, now plans to provide support to the sector.

Speaking in an interview with the Graphic Business during a field tour of the Apedwa Cocoa and Coffee Station, the Executive Director of the Seed Production Division of COCOBOD, Faustine Asamany, said the distribution of the seeds would begin in June.

Globally, the coffee industry is estimated to be worth over US$100 billion in value, with Africa earning just about two per cent of the amount despite the continent being a leading producer.

She said the seed production process started with the Cocoa Research Institute Ghana (CRIG), which did the development of the hybrid materials for the SPD.

“We then multiply the hybrid materials and then produce hybrid pods. We use the pods to establish seed gardens, starting with the clonal materials that we produce, out of which we use hand pollination to pollinate the clonal pods and develop hybrid seed pods,” she explained.

She said once in a while, CRIG came in to test the materials to ensure they met standards.

“Aside from cocoa, coffee is also an economic plant to the country and so CRIG has started developing some hybrid coffee berries.

“And in some of our cocoa stations, we have the coffee seed gardens where we intercrop the male and the female and they cross pollinate and out of that we get the berries which we plant. We intend to distribute 630,000 seedlings to farmers this year,” she stated.

The Executive Director pointed out that there were some delays in the coffee seed production due to the government’s initial policy.

She said initially the government wanted the SPD to only distribute clonal coffee materials, which the division did not have the capacity to do currently.

“So the government changed its policy after the Coffee Federation of Ghana invited us and said we should still produce some coffee seedlings for them because the yields between that and the clonal materials were similar,” she stated.

She said the seeds were expected to yield about 1,000 kilogrammes of coffee per hectare.

Unlike the cocoa sector where there is a producer price, Ms Asamany said the price of coffee would be based on the market dynamics.

She said currently, there was a huge demand for the commodity even in the local market which guaranteed a favourable price.

“For coffee, currently, the supply in Ghana is so low. The buyers and roasters who buy and sell it here in Ghana are not even getting the coffee.

“Some of them are also exporting to Burkina Faso and other African countries so the market is huge and that is why we are promoting the growth,” she noted.

She said COCOBOD, through the SPD, intended to go fully into the production of the coffee seedlings and supply to farmers

“We have engaged 75 farmer across the country to do production and they are currently working.

“But just like it is with cocoa farmers, we cannot mention the number of farmers we are going to supply the seeds to,” she said.