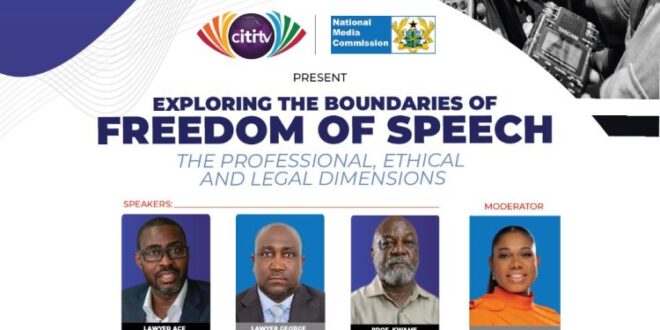 The discussion will highlight the professional, ethical and legal dimensions of issues of free speech in the country in the light of recent events that include the arrest of some popular persons over public comments they have made.

The event will be broadcast live on Citi FM and Citi TV at 10:30 am.

Recent incidents of arrest of journalists and media practitioners, public figures for publication of false news using the criminal code have brought the issue of freedom of speech and its boundaries back to the limelight, sparking a debate about the use of Article 207 and 208 by the police to prosecute such persons.

Dancehall artiste, Charles Nii Armah Mensah known in showbiz circles as Shatta Wale has been arrested by the Ghana Police Service. He was arrested for faking reports that he was shot by some unknown gunmen on Monday, October 18, 2021.

A statement from the Ghana Police Service said Captain Smart was arrested for making “some unsavoury pronouncements that hinge on peace and security”.

A separate statement from the National Media Commission (NMC) said Captain Smart called for “insurrection against the state of Ghana and its institutions” in a recent broadcast on Accra-based Onua FM.

Power FM’s Oheneba Boamah Bennie was jailed for 14 days and fined GH¢3,000 for contempt of court.

He was cited for contempt when he claimed that President Akufo-Addo had met with judges of the Supreme Court to influence them on the judgment of the 2020 Election Petition brought by former President John Dramani Mahama and his party, the National Democratic Congress (NDC).

The Host of ‘The Citizen Show’ on Accra FM, Kwabena Bobie Ansah, was arrested by some persons believed to be National Security operatives.

According to reports, the men in police uniform, who reportedly failed to disclose their identities, arrested Mr. Ansah, an employee of the radio station, which is a subsidiary of the Class Media Group (CMG).

The Police report indicated among other things that Mr. Ansah was arrested for alleging that the first and second ladies, Rebecca Akufo-Addo and Mrs. Samira Bawumia respectively had fraudulently acquired State lands at AU village, and around the Kotoka International Airport, Accra for the construction of the “Rebecca Foundation”, a Non-Governmental Project.

Mr. Mensah Thompson of ASEPA had alleged that relatives of President Akufo-Addo had used the presidential jet for shopping in the United Kingdom.

The Ghana Armed Forces released a statement to deny the claim and put out facts concerning the presidential jet. Mensah Thompson publicly apologised and retracted the false publication.