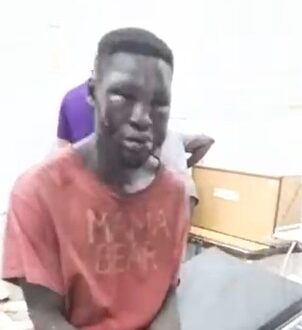 A Covid-19 records taker at the Cape Coast Teaching Hospital ( CCTH),  Emmanuel Bentil, has been mercilessly beaten to by five young men, a pragyia rider and four others at Siwdo Methodist opposite Kingdom FM.

The culprits, upon seeing Mr. Bentil leading the small boy to locate his parents, assumed he was a kidnapper and pounced on the victim.

The victim disclosed that he saw the small boy crying on the roadside on Tuesday around 10:00 am and decided to find out why he was crying.

According to CCTH staff, the boy told him he is staying at Siwdo and is looking for his parents therefore, he [Bentil] chose to take him to his parents in the said area.

Narrating his ordeal further, he said after he gave the boy to his parents four boys, together with a pragyia rider, approached him and asked him where he was taking the boy to and without waiting for his response subjected him to a mob action with cement blocks, sticks among other weapons.

“They kidnapped me in a room and when l was becoming unconscious, I sneaked out and ran to Abura Police Station to report the case but due to how l was bleeding profusely, they also dragged me out of the police station with a cane… l later rushed to the Cape Coast Teaching Hospital for treatment”, he told Angel News’ Anaafi Kokooto in an interview.

He stressed that the boys decided to beat him to death but some of the residents rescued him.

Meanwhile, the victim’s sister explained that, she got a call from her brother’s phone number but when she picked, it wasn’t him but one of the guys who told her to meet them at IBB junction at Cape Coast.

She continued that, the guys told her they have kidnapped her brother and are demanding GHc500 before they will release him.

After negotiating with them for a price cut, she paid GHc300 to them.

The case has been reported to Kotokuraba Police Station for investigations.