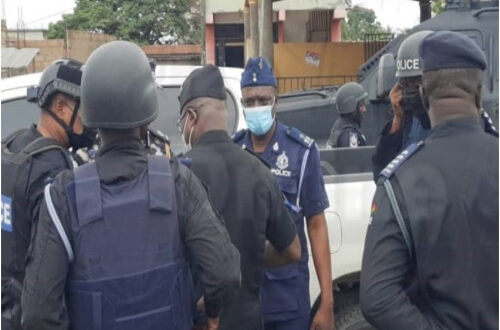 Two suspected armed robbers have been shot dead by the Police while one other is in critical condition undergoing medical care.

The incident according to the Police occurred in the Bono East and Savannah Regions, after a combined team of highly trained Operations and Intelligence Team broke into a criminal cell in the two regions, killing the two alleged robbers in the process around Bole in the Savannah Region.

A statement from the Police said the gang of robbers who were allegedly planning another robbery attack, opened fire on the police when they were closing in on them, leading to the death of Iddrisu and Dramani Iddi when the Police fired back.

The alleged notorious leader of the gang, All Iguclu, sustained gunshot wounds and is responding to treatment under a Police guard. He is allegedly the mastermind behind the murder of one Alhaji Ousman Amadu and Fuseini Galagala among others.

Police intelligence reveals that the gang is largely responsible for the series of robberies, kidnappings and murder cases in the two regions especially in the areas of Bole, Sawla, Banda-Nkwanta, Prang, Yeji, Kintampo, New Longoro and Techiman.

Multiple weapons and ammunition were found at the scene, according to the Police.