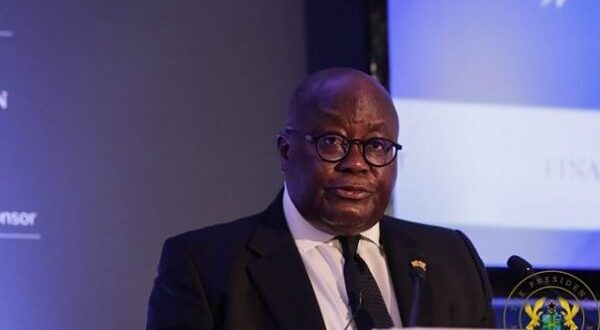 The President, Nana Akufo-Addo, has expressed sadness about the Thursday afternoon explosion at Appiate near Bogoso in the Western Region that resulted in the death of scores of residents.

While consoling the bereaved families, he extended wishes of speedy recovery to the injured.

In a series of tweets, the president said, “I have just received a briefing on the circumstances that led to an explosion in Appiate near Bogoso, in the Western Region, resulting in the loss of lives and the destruction of properties belonging to residents. It is a truly sad, unfortunate and tragic incident, and I extend, on behalf of Government, deep condolences to the families of the deceased, and I wish the injured a speedy recovery.”

Preliminary investigations by the police said a vehicle transporting explosives to a mining site collided with a motorcycle resulting in the explosion.

“…A mining explosive vehicle moving from Tarkwa to Chirano mines collided with a motorcycle, resulting in the explosion.”

The police said most of the victims have been rescued and are on admission at various hospitals and clinics within the Bogoso Municipality.

He added that he has instructed NADMO ensure that rapid relief is brought to residents of the community.

“Government will spare no effort to ensure a rapid return to a situation of normalcy for residents of Appiate,” he said.

Meanwhile, reinforcement of resources and personnel have been deployed to effectively handle the incident.

The public has also been advised to move out of the area to nearby towns for their safety while recovery efforts are underway.

Bogoso is a mining town in the Prestea-Huni Valley district of the Western Region.