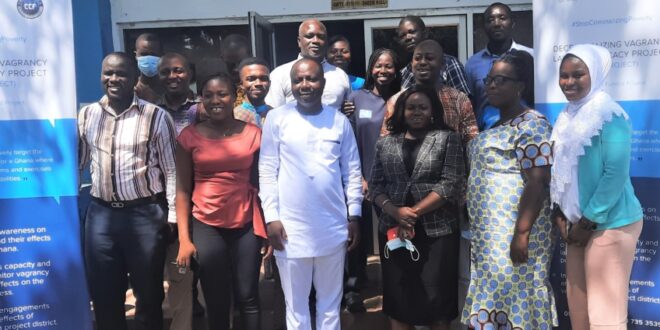 Crime Check Foundation, a human rights and crime prevention advocacy organization, is pushing for passing into law, the Non-Custodial Bill, which has been shelved for seven years.

As part of measures to de-populate the prisons, the group advocates the rights of low-class people who appeared to be targeted by outmoded colonial laws.

Chief Executive Officer of the Foundation, Ibrahim Oppong Kwarteng, observed that failure of successive governments to pass the bill has led to the illegal imprisonment of the poor in society. This, he explained has caused overcrowding in the prisons.

It aims at empowering vagrants through education in their basic rights and responsibilities.

Speaking at a day’s sensitization workshop for selected journalists in Accra, Mr. Ibrahim Kwarteng appealed to Parliament and the Attorney General to fast track work on the Non-Custodial Bill.

“It’s been in Parliament for 7-years.The last time I had audience with the Minister of Justice and Attorney General is about 6-weeks ago. We paid a courtesy call on him. He said they are going to pass it before the tenure of this Parliament expires.

The CCF, a crime prevention advocacy organization has series of projects including the petty offenders, health check series, and philanthropy series, among others.

Ghana is among 22 countries in Africa that penalize vagrants while equipping Police with powers of enforcement of vagrancy laws.

The December 4, 2020 ruling followed a submission to the court by the Pan African Lawyers Union (PALU) in May 2018.

The court defined “vagrancy laws as laws which criminalize the status of individuals as being poor, homeless or unemployed as opposed to specific reprehensible acts.”

But what difference will a Non-Custodial law make in justice delivery in Ghana?

“With the non-custodial law, our streets would be clean. Planting for Food and Jobs, we could commit lots of petty offenders to plant.

They have the provision of parole and others, where someone will go and work instead of the person going to jail. The person will be committed to community service so the objective is to decongest the prisons,” says Mr. Ibrahim.

For Private Legal practitioner Doris Bangful of Derry and Co, lack of non-custodial sentence means the poor and vagrants are imprisoned, adding up to overcrowding in the prisons.

“We are also talking of alternative forms of punishment as opposed to imprisonment, we can have non-custodial. For now, there’s nothing like that, so either imprisonment or fine and we have noticed that most of the victims of these offences are the poor and the homeless and invariably, they are unable to pay the fine and they end up serving prison sentences and we already know the situation in the prisons,” she added.