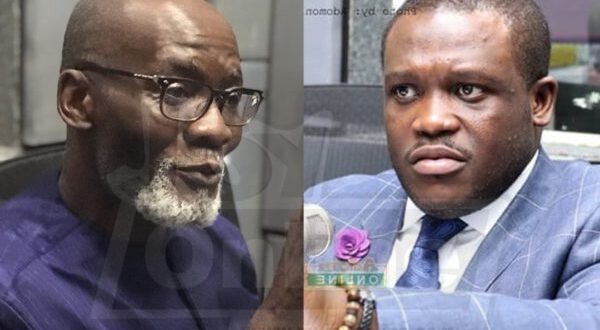 Anti-LGBTQ bill: If politics is all about populism, Sam George could be NDC’s presidential candidate – Gabby Otchere-Darko

As the debate surrounding the controversial anti-LGBTQ bill wears on, the founder of the Danquah Institute, Gabby Otchere-Darko, has taken a dig at NDC’s Sam George, one of the sponsors of the draft.

The Ningo Prampram Member of Parliament has been at the forefront of rallying support for the bill, which seeks to criminalise the activities of LGBTQ+ persons.

If the Promotion of Proper Human Sexual Rights and Ghanaian Family Values Bill is passed, persons who engage in the said practice could face up to five years imprisonment.

Some advocates could also face up to 10-year-jail time depending on the crime.

Proponents say they have the overwhelming support of Ghanaians, one of the reasons why they are pushing that it be passed expeditiously.

However, the legislation faces stiff opposition as the Parliament’s Committee on Constitutional and Legal Affairs receives over 120 memos geared towards shaping the bill.

While these memoranda trickle in ahead of Parliament’s resumption, Gabby Otchere-Darko, who has in the past, expressed his resentment for the private members’ bill, has shared his thoughts regarding the numbers argument.

In a tweet on Saturday, the NPP firebrand said, “if politics is all about populism & popularity, then I have fantastic news for the NDC: they have found their next presidential candidate & he is the MP for Ningo Prampram Sam George.”

If politics is all about populism & popularity then I have fantastic news for the NDC: they have found their next presidential candidate & he is the MP for Ningo Prampram #SamGeorge. Young, articulate, driven, bold, & extremely popular. The main sponsor of the anti-LBGTQI Bill.

Sam George had been on a media spree courting support for the bill garnering international attention amid mixed reactions locally.

However sarcastic as it seemed, Sam George did not take the assertion lightly.

According to the MP, he has no interest in running for flagbearership role of his party, the National Democratic Congress (NDC), adding that “…I completely focused on delivering my mandate to the people of Ningo-Prampram.”

Dear @GabbyDarko, I am completely focused on delivering my mandate to the people of Ningo-Prampram. I wholeheartedly endorse the return of @JDMahama to rescue our Country from the abysmal presidency of your cousin @NAkufoAddo. Cheers. 🦁

“I wholeheartedly endorse the return of @JDMahama [John Mahama] to rescue our Country from the abysmal presidency of your cousin @NAkufoAddo [Nana Akufo-Addo],” he responded in reply to Mr Otchere-Darko’s Twitter post.

The draft document also seeks to criminalise organisations that advocate or promote the activity in the country.

Meanwhile, top clergy members and Islamic clerics have presented memos to the House’s Committee of Constitution and Legal Affairs in support of the bill.

The Church of Pentecost has declared its readiness to vote out any political party that stands against the bill’s passage.

However, a series of memoranda, which oppose the legislation, have also been presented to the Committee.

The sponsors of the memoranda describe the bill as an endorsement of state-sponsored violence against minority groups and an infringement on their human rights.

In an interview on JoyNews’ The Probe, Chairman of the Constitutional, Legal and Parliamentary Affairs Committee, Kwame Anyimadu Antwi, indicated that over 124 memoranda had been submitted to them for appropriate action to be taken.