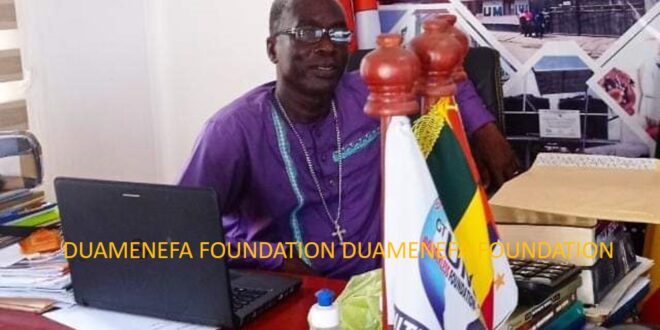 Bishop Cephas Korbla Nyamador, the Volta Regional Baseline Leader of the aforementioned NGO, and the head pastor of Holy Ghost Miracle Church, now Doxa Ministries of Agbozume in the Volta Region of the Republic of Ghana, has allegedly confessed on a viral voice recording hijacked by Fafaa Fm, that the money contributed by pastors and church members way back in 2019, in anticipation for fulfillment of the juicy packages promised the churches and pastors has been embezzled by his boss Apostle Joel Anku, the Country representative of the Borderless Mission Ghana.

The UM Borderless Mission through their leadership has promised pastors and congregants various juicy packages ranging from, a) Building of Chapels, b) Free Feeding of Congregants, c)  Scholarship to three children of each pastor, d) Undisclosed Regular Monthly Salaries to Registered Member Pastors among others.

It would be recalled that way back in June, 2019, the Borderless Mission Ghana, through their leadership has held a meeting in the Holy Ghost Miracle Church, now changed to DOXA Ministries, Agbozume, where they have disclosed to the pastors and congregants that the Borderless Mission Ghana was granted access to a huge amount of money stolen by the former head of states of Ghana.

This stolen money according to the recorded video of the meeting held on the 4th day of June, 2019 and hijacked by Fafaa Fm, has been granted to the UM Borderless Mission to be used for these proposed laudable projects, hence the various churches and pastors in most regions and districts of Ghana were made to pay various amount of money as eligibility criteria to enjoy the largesse.

Some of the aggrieved pastors and churches in the Volta and Oti Regions and other parts of Ghana has allegedly fallen victim to the alleged proposed largesse from the Switzerland Bank Account.

While a group called the PAHA, an association of pastors in Oti Region demanded the refund of over Ghc 87,450.00 from Joel Anku, other pastors in the Volta Region have been chasing the baseline leader Nyamador for refund of the money.

In a viral voice recording between Bishop Cephas Nyamador and the Canadian trained civil engineer, Emil Senyo, trending on social media, Nyamador allegedly claimed that his boss Joel has lost all hopes after embezzling and diverting the public fund received from the pastors.

He was explaining this to the Canadian trained engineer who claimed on Fafaa Fm that the Borderless Mission Ghana through its leader, Apostle Joel Daniel Anku has defrauded him by false pretence to the tune of over Ghc 28,000 to Ghc 36,000.

Below is agreement to refund the PAHA members

In the said viral voice recording, Bishop Cephas Nyamador allegedly confessed to the engineer that their country director Joel together with other leaders of the borderless mission has embezzled their money, he also claimed that Joel has invested Ghc 60,000 part of the money in a Gold Business where he is expecting returns.

Listen to the viral secret recordings below:

Bishop Nyamador further alleged that his boss Joel Anku told him he is no longer hoping to get funding from the UM. Borderless Mission Ghana to finance their proposed projects as promised to over 1,000 churches and more than 7,000 church members who contributed between Ghc 20 – Ghc 300.00, while some borrowed their pocket money to the group in anticipation for the proposed aforementioned juicy packages. The Engineer Emil, however reported the group to the CID headquarters in Accra for further investigation and possible prosecution in a court of competent jurisdiction.

Bishop Nyamador and his Boss Apostle Joel were duly contacted by Fafaa Fm to respond to the various allegations and the viral voice recordings but they have been foot dragging ever since these allegations started trending in the public domain from 2019 till date.

Watch out for further development………………..