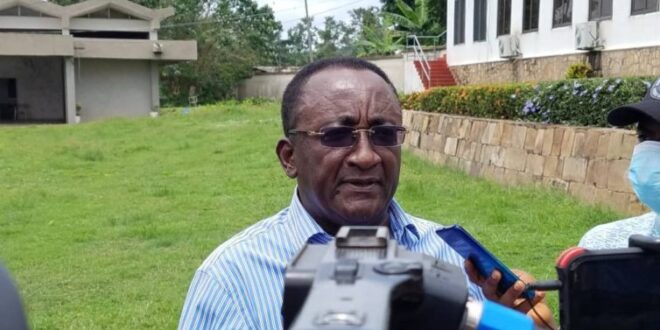 The Minister of Food and Agriculture, Dr. Owusu Afriyie Akoto, has refuted claims of a widespread shortage of crop fertilizer in the Volta Region.

The National Democratic Congress (NDC) in the Volta Region on Monday interjected the Minister’s tour of the Region with a press release alleging widespread shortage of the essential agro-inputs, saying, it had caused price hikes and attendant constraints on crop production.

The Minister, meeting heads of the regional agric directorate few hours after the press release, said the fertilizers had only been restricted to vetted retailers in 26 border districts in the country, six of which were in the Region.

He said fertilizers were available, and that data attested to increased yield in the Region, thus, the cries of the opposition Party passed only for wanton doom saying, and carried the torment of smuggling syndicates affected by the restricted trade in the border districts.

Dr. Afriyie Akoto said he had witnessed a flourishing agro system in the Region that showed no signs of failure.

“What we saw yesterday is really what I will call progress in Agriculture. From the very cutting edge of science,” the Minister remarked while making reference to a Dutch plant propagation laboratory, and a mega potato exporter, both of which he noted were his “biggest impact” while in the Region.

“Apart from that, my general observation in the countryside shows that there has been a very successful major season harvest and you can see that the minor season is emerging. The rains have been good and we are hoping for a good harvest in the Volta Region in the minor season, and the doomsayers want to give the expression that there is going to be a shortage.

“There is no way that Volta Region with its performance can have a shortage in Ghana. It wouldn’t happen,” he stressed.

The Minister however highlighted that “farmers in the Volta Region had responded slowly to the Planting for Food and Jobs Program in the first three years”, after which input consumption rose alongside increasing acceptance of the policy and its prospects.

He added also that fertilizer production across the world had taken a hit by the coronavirus pandemic, and that the scare of food shortages was expected.

“So we are expecting that there will be shortage of fertilizer and of course that means that fertilizer prices are going up and up, which will mean that farmers will get less fertilizers applied at their fields, and they are even talking about shortage of food in Europe.

“So we as price takers are not immune to that. If they themselves, the producers, in the countries where these fertilizers are produced are struggling to get enough supplies at very high prices, we are just price takers and obviously we cannot cocoon ourselves from that, and that one everybody should understand,” Dr. Afriyie Akoto said.

He thus advised farmers benefiting from the program to consider weaning off government subsidies, which had become a lifeline to criminal entities.

“Don’t forget this subsidy is not there forever. It is only for a very small period. The Government of Akufo Addo is taking away from Ghanaian taxpayers, nearly one billion cedis to give as subsidy for the fertilizers and the seeds in 2020, otherwise, that 950 million cedis should have been paid by the farmer. And we know that to a point the farmers cannot afford to buy at that time. But if applying this and you are getting three, four times more production, it means your income has gone up three, four more times, and why is it that you can’t go onto the open market to buy?

“Its about time we thought seriously about the subsidy, because at the end of the day, there is a lot of smuggling which goes on in this country and we cannot afford to take the taxpayers money to subsidize a product then very criminal elements will smuggle it across the border so that the farmer does not get the full benefit. It is totally wrong. “No government has presided over that kind of arrangement. This is why we excluded some of these districts from the distribution of fertilizer for two years,” the Minister stated.

He called to appreciate the government’s efforts and successes on the programme, saying it shot the country from a major importer to a major exporter of food.

“We have to acknowledge that this government has transformed the lives of many many farmers in the Volta Region, and throughout the country and has even become a net exporter of food, and that nobody can take it away.

“We used to import hundreds of thousands of metric tonnes of maize into this country, until we came to power in 2017. Now we export food out of this country. We supply the whole West Africa with food. How is this possible? It is because of the success of Planting for Food and Jobs. It’s as simple as that,” he insisted.

The planting for food and jobs program has provided tens of thousands of metric tons of seeds and fertilizers, which has benefited over 160,000 farmers in the Volta Region.

Mr. Seth Osei Akoto, Director of Crops at the Ministry, said the Region had only 83 distributors of fertilizer, and called for more entrepreneurs to consider the industry.

He also mentioned that the supply of the input on credit basis was waning in the Region due to slow remittance, with suppliers readily providing upon cash payments.